This is the condensed version that focuses on Donald Trump. However, the brief introduction to the Bible Fractal presented first is included for context. The full article within its original context can be found at this link:

Compare the “Coliseum Fractal” (made public the month of Trump’s inauguration) with images from “Trump Towers“, where Trump lived before moving into the White House. Notice the theme of the “The Sun King” and the “Chariot of Apollo”. An interesting theme for a man born during a lunar eclipse!

Trump’s billion-dollar disasters set the record (or ties), both for the number of disasters, but also for cost

But more than that, 2017 has already significantly surpassed 2005 for the “most costly” overall. So far 2017, including the California fires, have total losses for the year at between 200 and 400 billion dollars. The California vineyard fires alone may total as much as 85 billion dollars.

The below speech at the CIA Headquarter was on the day after his inauguration. A freak severe tornado outbreak (i.e., the first billion-dollar disaster) was unfolding as he said these words…

Why is all this happening to Trump?

“For it is time for judgment to begin with God’s household; and if it begins with us, what will the outcome be for those who do not obey the gospel of God?” (1Pet 4:7.)

“But wherein have we sinned?”

By asking for a king and judges to rule over you “like all the other nations” — when Jesus was your king! (Hosea 8) To some degree or another, most American Christians are confusing the kingdom of God with politics. Jesus said, “My kingdom is not of this world”.

This word that I share in this video came to me as Hurricane Maria was crossing Purto Richo — even as the Jewish New Year was occurring in Israel. At the time I put out this video, I had forgotten that Trump’s presidency had begun with the same sign of disapproval that had accompanied King Saul’s inauguration.

Moreover, 2017 is currently tied with 2011 for disasters, and it happens that the most horrifying disaster of 2011 occurred the same day that David Wilkerson died.

(Who is David Wilkerson? A movie was made of his brave outreach among the gangs of New York.)

David Wilkerson died at the peak of the worst tornado outbreak ever recorded. On the day of his death alone, there were 218 tornadoes with 318 deaths. Considering his book, “The Vision”, how can anyone conclude this a mere coincidence? In a sense, David sealed his testimony with his own blood.

Around the same time that he died, God showed me an image of David Wilkerson among the clouds (saints) of heaven, seated with Christ. 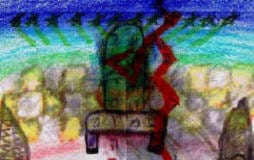 Astonishingly, this tornado outbreak was just one of seven in a series of billion-dollar tornado disasters that year (2011). I predicted this would happen several months beforehand, in January of 2011. Four of these seven tornado disasters fell on the three exact dates that I specified months ahead of time — with the Joplin (May 22) tornado happening the same hour — 1260 + 1260 days exactly. The remaining three of the seven-billion-dollar tornado outbreaks were within a week or two of the time predicted. This original prediction is recorded on an independent website on “WaybackMachine” for verification. (See “Endnote” towards the end of that article).

[I had predicted that these “terrible tornadoes” would occur 1260 + 1260 days (7 years) from when the Balance Bible Code was revealed, that is, from June 27, 2004, ending 6 pm — with a minus seven days, and then a plus and minus 30 days from that particular week. (I.e., mid-April, May 15-22, and June of 2011). For this reason, there were seven billion-dollar tornado disasters in 2011. God highlighted the number seven — the number of completion. After all, why not six or eight billion-dollar tornado disasters?

The fact that 2004 holds the record for most tornadoes in a single year, and yet only had a combined total of 550 million dollars damage underscores the improbability of even just one billion-dollar tornado outbreak in a given year, let alone seven!]

I mention this so that hopefully people take my video seriously, even if it contradicts what the majority are prophesying:

Yes, but at what cost?

Here are two excerpts from David Wilkerson’s 1974-book, “The Vision”.

“Floods, hurricanes and tornadoes will destroy crops, animals and much wildlife driving prices even higher and causing some experts to suggest that nature is losing its balance.”

“Many men will appear to be repentant during the times of violent chastisement by nature but the short period of relief will make it appear that nature has settled down and men will be comforted by warmed, sunshine and normal seasonal weather. But more violence, far worse will soon follow.”

If he were alive today, what would David Wilkerson think of the political alliance of Church and Trump today?

Unquestionably, at the very least Wilkerson would be extremely suspicious, for he also said in “The Vision”…

“There is going to be a sudden mysterious chain of events. Just when it appears the ecumenical movement is nearly dead, a rather mysterious chain of events will bring about the framework for this union. Rome is going to insist on and receive concessions from the Protestant ecumenical leaders. The Pope will be considered more of a political than a spiritual leader of this church union…”

“I see something that frightens me to the very core of my soul. I see an army of career people invading the most influential posts in this super church. They are going to be ungodly, antichrist people, obsessed with the idea that this super church must become a big political power, strong enough to defeat anybody who opposes its actions. While those who are in leadership are speaking about miracles and love and reconciliation, these hirelings who work under them are going to be harassing and persecuting every religious organization that does not come under their leadership.”

In view of what David Wilkerson has said in “The Vision”, it’s safe to say that David would likely have nodded in agreement to my video.

The “out-of-season” storm: both a sign of disapproval at King Saul’s inauguration and Trump’s

God gave a sign to prove that He was displeased when Israel asked for a king “like all the other nations”. The sign that God was displeased with Israel was that God would send “thunder and rain” in the off-season for this type of weather. Also, this off-season weather event would occur later on the same day after Saul’s inauguration.

“Now then, stand still and see this great thing the Lord is about to do before your eyes! Is it not wheat harvest now? I will call on the Lord to send thunder and rain. And you will realize what an evil thing you did in the eyes of the Lord when you asked for a king.” (ISam 12:16-17)

Is Trump one of the prophets?

“It was almost raining. The rain should have scared them away. But God looked down and he said, “We’re not going to let it rain on your speech.” In fact, when I first started I said “Oh no!” The first line I got hit by a couple of drops! I said, “Oh, this is too bad, but we’ll go right through it.” But the truth is that it stopped immediately. It was amazing. And then it became really sunny. Then I walked off and it poured right after I left. It poured!“ 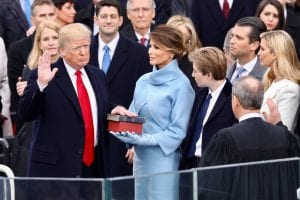 “It poured!” And with that unwitting prophetic utterance, one can mark the commencement of the serial weather-related disasters that have followed, beginning with this first one:

“…the outbreak  produced a total of 81 tornadoes, cementing its status as the second-largest January tornado outbreak and the third-largest winter tornado outbreak since 1950. Furthermore, it was the largest outbreak on record in Georgia with 42 tornadoes confirmed in the state… Non-tornadic impacts were also felt along the East Coast of the United States.”

The very same day of his inauguration marked the start of this unusual weather event, “unusual” in that it was out of season. By early that same evening, tornado warnings were issued. And before the sun rose the next morning, tornadoes broke out across the South.

But more significantly, this very same day also marks the first of two more records, (or at the least, tied to them): The most in number, and the costliest, billion-dollar weather-disasters in  U.S. history.

Keep in mind that technically, the inauguration lasts four days, from January 17 to 21, 2017. Severe storms began the 20th, the day that he was sworn in, and severe tornadoes before the morning of the 21st.

By the second day of the outbreak, Washinton DC was also included in the zone of thunderstorms.

These disasters began in January, the same month that I put out for the first time the Bible Fractal. Few cared, nor noticed. But who would? It needs interpretation. This includes the Nephilim riddle that I put out on YouTube, Jan. 15, 2017, about the lunar and solar eclipses that in part concern Donald Trump and Jared Corey Kushner.

(I’ll say it again: “Pray for Trump. Respect his position.” But God’s kingdom is not of this world!)

This has been the condensed version of this article that only focused on Donald Trump. The full article within its original context can be found at this link: