The ancient stones of Jerusalem host a variety of plant life including the prolific Thorny Caper. Batya Vagshal, a religious Israeli woman, was shocked to see that the plants had grown to form the shapes of letters.

Over the summer, the first three of the four letters that make up the Divine Name of God have formed on the eastern wall as predicted 21 years ago. It is located near the gate that Bible prophecy says that Jesus will pass through upon His Second Coming.

The timing is also interesting because the end of this summer (2021) begins the seventh-year Sabbath, commemorated in Israel.

The writing on the eastern temple wall made without human hands was predicted 21 years ago by the Hand Bible Code. It was posted 21 years to the month before Israel365 broke the news. As we shall see, “twenty-one” is very significant.

Below is a video that you may want to watch, and then come back to this article.

Numerical meaning of these three letters written on the wall

Twenty-one years ago, in 2000, the Lord gave insight into the four words, “Mene, Mene, Tekel, Uparsisn”, written upon the palace wall as recorded in Daniel 5. In the many articles that I wrote back then (and again just a few years ago), I included a discussion of the value of each letter, better known as gematria. I said, then, that it predicted the death of Saddam Hussein of Iraq (Babylon). I said that his death would occur exactly seven years after the Lord revealed the acrostic (as seen at left). (“21 years” is “seven times three”.)

Gematria is an ancient practice well known to Jews today. Many scholars believe that there are examples of this in the Bible. Each letter in the Hebrew Bible is assigned a specific value. For this reason, “26” is considered a sacred number to Jews because it is the total value of the Name Jehovah יהוה‎ (Yahweh), also known as the Tetragrammaton. Its opposite is “666” the value of the name of antichrist.

(Hebrew reads from right to left.)

The last letter is missing. Is “He ה” coming soon?

I refer to the meaning of 21 now and again in my articles. Its meaning is derived from Daniel 10.

At that time I, Daniel, mourned for three weeks. 3 I ate no choice food; no meat or wine touched my lips; and I used no lotions at all until the three weeks were over…

Then he continued, “Do not be afraid, Daniel. Since the first day that you set your mind to gain understanding and to humble yourself before your God, your words were heard, and I have come in response to them. 13 But the prince of the Persian kingdom resisted me twenty-one days.

Then Michael, one of the chief princes, came to help me, because I was detained there with the king of Persia. 14 Now I have come to explain to you what will happen to your people in the future, for the vision concerns a time yet to come.” Daniel 10:2, 12-14

Twenty-one, therefore, has the meaning of “delay”. The angel was delayed “21 days” from coming to Daniel.

And because  “21” is “seven-times-three”, it is also the divine name of the Triune God. Seven is the number of perfection and three of the trinity. Thus, 21 can symbolize the perfection of God.

Because the three letters on the wall equal “21” and are part of the divine Name, thus it is appropriate within this context to assume that “21” has both the above meanings.

What the Name, written on the wall, means

I will now interpret the writing on the wall:

The Name of the Lord is coming. Though He delays, wait for Him.

He will come at the right time.

The final Heh of the Divine Name is almost here.

The Lord will come. He will enter through the Eastern Gate. He will not be crowned with thorns this time, but with the glory of Israel, a seven-fold crown.

“May his name be blotted out!”

Jesus is first rejected, but then accepted

Jesus is the name of the Lord!

Most Jews reject the name of Jesus. They show their contempt by leaving off the last letter in ישוע. (Recall the earlier “Hand Code”.) Like the writing on the temple wall, this fourth letter is omitted by most Rabbis. To them, he is יש-ו‎. As an abbreviation, these three letters יש-ו can also mean, “May His name be blotted out!”.  Thus, the last letter in a sense is “blotted out”.

Recall what the “Hand Code” read as interpreted 21 years before:

The forearm/hand has come to “rub out the arrogant one,” an irony since the hand is writing on the wall!

So now the divine name, Yahweh, appears as a sign to the Jew. It, too, lacks the final fourth letter. Notably, according to Wikipedia the first three letters in Yahweh יָהו‎ are part of a possible alternative spelling for Yeshua! 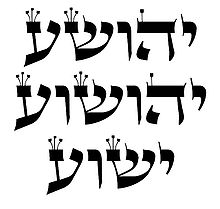 The name Yehoshua has the form of a compound of “Yeho-” and “shua”: Yeho- יְהוֹ‎ is another form of יָהו‎ Yahu, a theophoric element standing for the name of God יהוה (the Tetragrammaton YHWH, sometimes transcribed into English as Yahweh), and שׁוּעַ‎ shua‘ is a noun meaning “a cry for help”, “a saving cry”,[12][13][14] that is to say, a shout given when in need of rescue.

So then, on the eastern wall this summer, inscribed using thorn bushes, appeared the first of the three letters of Jesus’ name when spelled in full: יְהוֹשֻׁעַ

And notice that יְהוֹשֻׁעַ is spelled using seven crowns, as seen in the above image.

Moreover, the appearance of the name heralds the seventh year of rest, and indeed the 70th jubilee in half-seven years, (7 x 7 x 70.) Instead of a crown of thorns now sits a crown of life!

Jesus will come when all Israel “cries out” to him.

Look, your house (temple) is left to you desolate. For I tell you, you will not see me again until you say, ‘Blessed is he who comes in the NAME of the Lord.’ ” Matt. 23:38

This is the key verse that the Lord puts into remembrance this summer. Jesus will come again from the direction of the Mt. of Olives, then on through the Eastern Gate. Jesus is quoting from Psalm 118.

Open for me the gates of the righteous;

I will enter and give thanks to the Lord…

The stone the builders rejected

has become the cornerstone…

Lord, save us! יְהוָה הוֹשִׁיעָה

Blessed is he who comes in the name of the Lord.

From the house of the Lord we bless you.  Psalm 118

Below is a quote from nearly two decades ago.

Notice that the hand was partly posted 21 years to the month before the current writing on the temple wall as reported in Israel365News.

As said in the above quote, the Hand code was posted in its entirety “Oct. 2, 2001”, which was the first day of Tabernacles.

Is it the hand of YHWH?

He Himself goes to war. He put him to death!

YHWH goes to war against her (i.e., ‘Mystery Babylon’)
and the arrogant one!

YHWH goes to war against her,
and the rebellious one!

YHWH goes to war against her,
and the one being removed!”

10 thoughts on “As foretold 21 years ago, Name of God appears on Jerusalem temple wall”