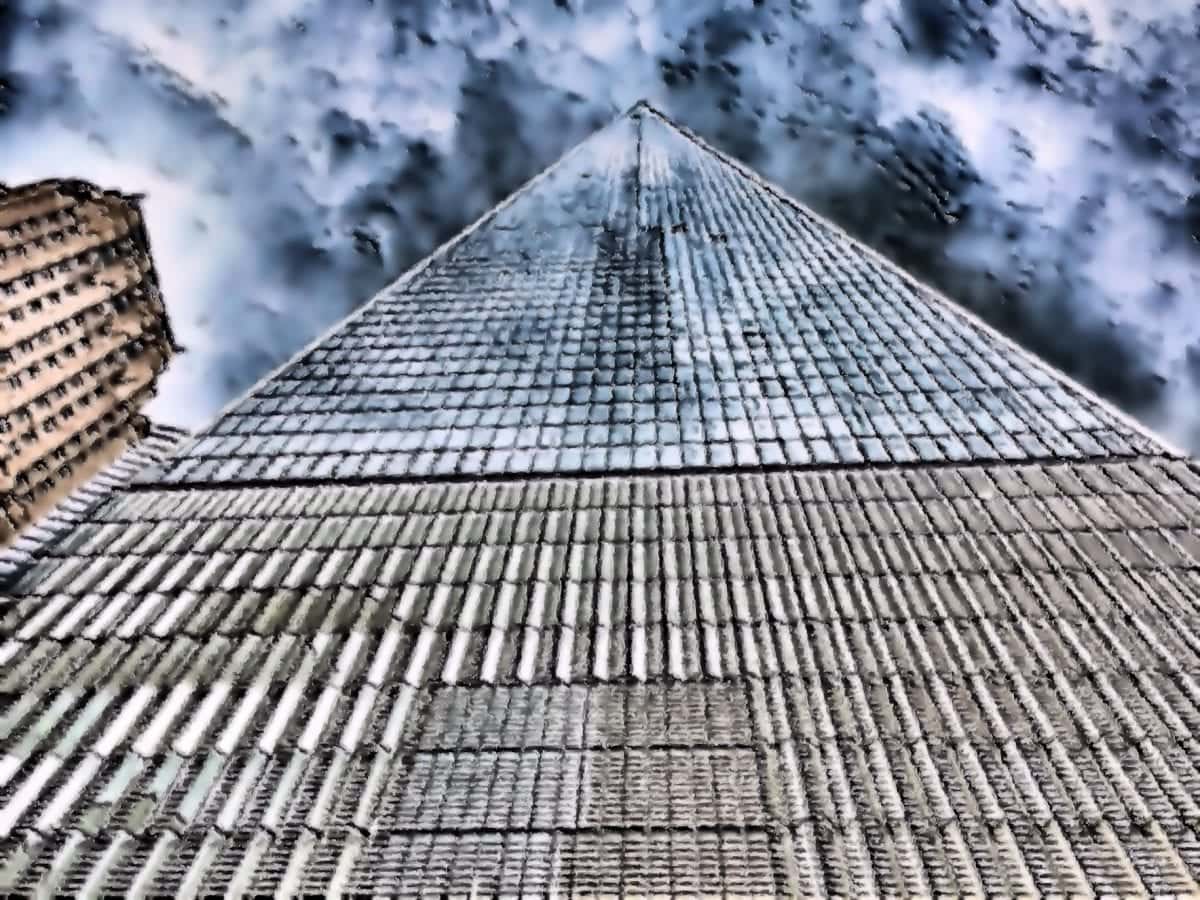 The above image is that of the One World Trade Center as seen from ground level. It was built to replace the Twin Towers that fell as foretold in the first Mene Tekel Picture Code on Feb 4, 2000.

The original writing on the wall was in Babylon, (539 BC). Therefore, it is most telling that the Twin Towers were defiantly replaced with the “One World Trade Center“. (The name of the tower echoes the words of Nimrod himself!) Moreover, it is shaped like the Tower of Babel itself. (Or like the Pyramids of Egypt. Both have the same root meaning, that is, a man-made mountain to reach heaven.)

This symbol of defiance, this tower was lit up pink to celebrate an abortion bill that legalized murder up until the birth of a baby. Appropriately this pyramidal-tower, the tallest tower in America, was lit pink — pink like the softness of a baby; whitish-red like blood spilled.

The wrath of God is revealed from heaven… 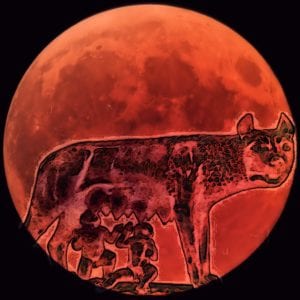 Two days before the bloody tower was the 5th sign of the “Wolf Blood-Moon”.  At that very minute, God struck the moon with a rare meteor.

And three days after the bloody tower was the 6th sign of the “River of Blood“. God revealed from heaven his wrath against the murder of innocent blood. This post will explain the reasons ‘why’, ‘where’ and ‘when’ these things happened in as few words as possible.

In celebration of the freedom to choose murder over life, the Freedom Center was defiantly lit up pink in celebration of an abortion bill passed Jan 22, 2019, allowing murder up until the moment of birth.

Then the third angel poured out his bowl into the rivers and springs of water, and they turned to blood. And I heard the angel of the waters say:

“Righteous are You, O Holy One, who is and who was, because You have brought these judgments.

For they have spilled the blood of saints and prophets, and You have given them blood to drink as they deserve.”

And I heard the altar reply:

Notice the reply of the altar in the last verse:

“Yes, Lord God Almighty, true and just are Your judgments.”

This cry from the altar include babies — babies murdered upon the altar of convenience and lust.

(As said before, God fulfills prophecy like a fractal, that is, in many ways and degrees, but all interconnected.)

To be specific, it was The One World Trade Center’s 408-foot spire that was lit pink beneath a full moon.

At the top of this spire is the same structure as encoded within the mene tekel picture code. Both are made up of nine triangles.

(Three levels with 5+3+1 triangles to form the one pyramid, plus the final pole at top.)

Compare the structure of the two large images below. Both have the 5+3+1 pyramidal structure.

Also, this antenna at top blasts both light and radio signals, as symbolized by the sun and the letters flowing out of the mene picture code below.

MENE: “You are numbered”

As I have been saying, these signs follow a clear pattern.

Both the day when these things were revealed and posted, and the 15 signs that followed, (some events with multiple dates), occur in multiples of five from the day when God began to reveal it and also the day when I first posted the message, (Nov 23 and Dec 6, 2018, respectively).

This message is about the severe sentence gone out against the fallen angels that pretend to be gods, especially the moon-god. Those that worship them will suffer a similar fate.

Even a quick look at the calendar to the left (arrayed in rows of five rather than seven as normal) reveals a stunning pattern: The first and last vertical rows are missed every time, and the middle row have only two events, (50 days apart).

By avoiding certain dates, the (yellow) cross in the middle is left untouched thereby causing it to be made manifest. By this God reminds us that the only safe place to be when calamities occur is the cross. Moreover, this large cross overlaps the cross in the mene tekel prophetic image as seen at right. (Remember, this image at right was posted Dec 6, 2018, before any signs had yet manifested.)

As said, events are happening in multiples of five because the gods of Babylon went by a number as well as a name. Therefore, they are being judged by name and number by the one true God. Their numbers occur in multiples of five,  from five to sixty — 12 gods. The number 60 is the chief god, Anu. “Sixty” is prominent in Babylonian numerology. It happens that the One World Center Tower of Babel was lit pink exactly sixty days from the day that God sent His invisible hand again on Nov 23, 2018.

Locate the “Nov 23, 2018” date in the calendar at left with its overlay of the ‘hand’ weighing Osirus in the balance. Click to enlarge. From there count 60 days to Jan 22, 2019, when the abortion bill was passed in New York.

Blood Moon to River of Blood: What’s the connection?

The blood moon that was struck by the meteor is explained in “Sign 5A“, as is the river of blood five days later. 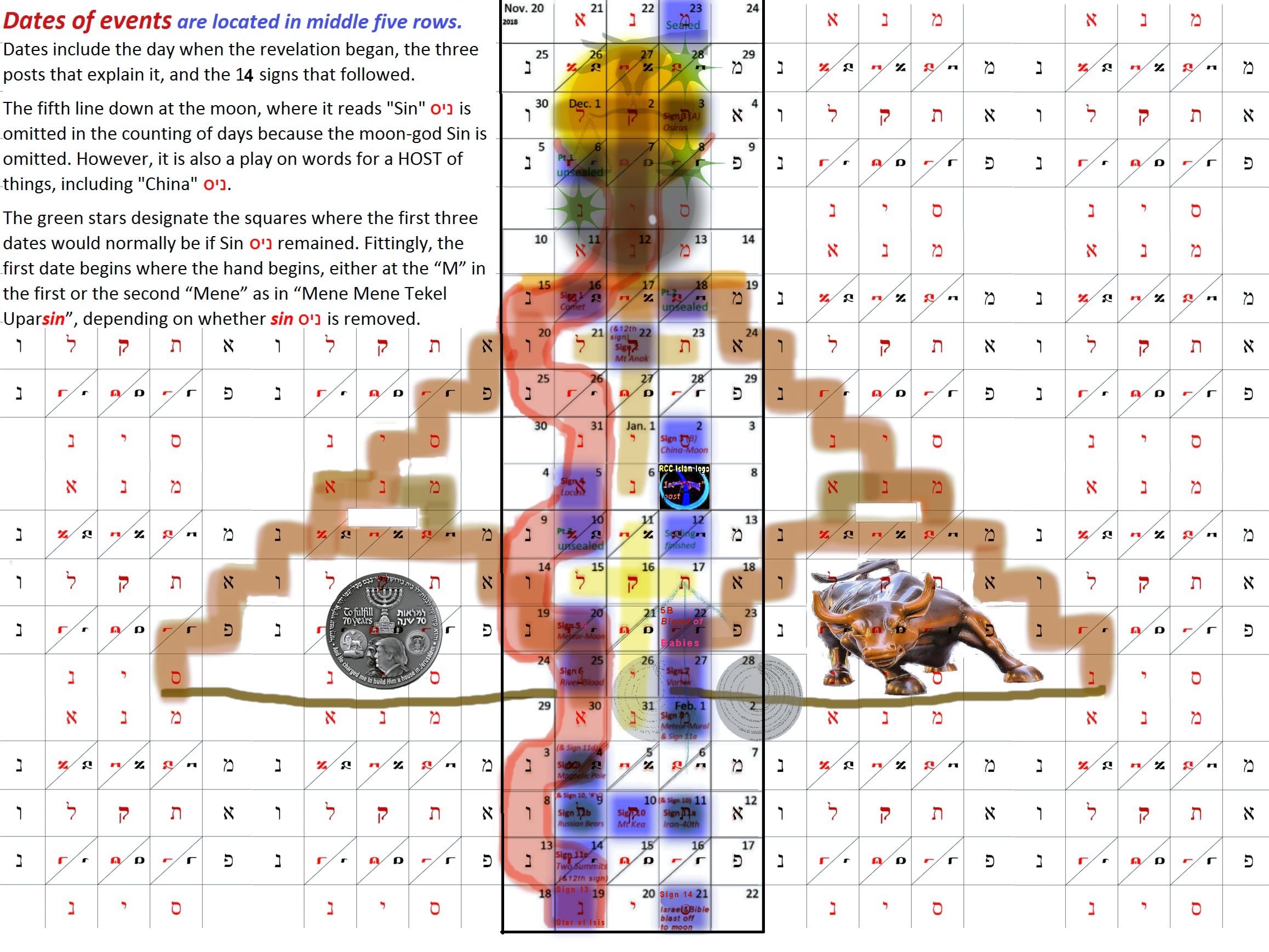 Why, when and where

Recall that the Hebrew letters in the above image simply spell, “Mene Mene Tekel Upharsin”. They are repeated five times horizontally and four times vertically. This means that the image of the hand with the balance is actually repeated four times as it moves down the central column (of 5*20 squares, outlined in black).

It is important because the small hand that initially weighs the god Osiris in the balance (at left) represents the entire mountain, which in turn is shaped like a massive scale/balance. Therefore, to weigh with the small scales in heaven is to weigh with the large one on earth. Indeed, the large mountain-shaped scales symbolize earth.

As far as this 5th sign is concerned,  the ziggurat (mountain scale) that faces us represents North and South America. (See left image.) The mountain-scale has a half-shekel of Trump on the right scale (our left) weighed against a bull in the other scale.

Thus, when you superimpose the hand with the scales over the two letters that represent the dates of 5A and 5B, notice that each are in the small handle of the balances on either side. This means, therefore, that the large balance where we find the Trump coin and the bull of Wall Street is represented by the small scales (i.e., 5A and 5B).

I know that this is complex. Below is a synopsis of what this sign means. Compare the images with their dates closely to better understand what I mean.

What all this means

In the two below images where the maps are superimposed over the picture code, notice that Washington and New York are not only in the full moon, but are positioned exactly just above the middle of the altar on top of the mountain pyramid/ziggurat. Thus, New York, the seat of abortion in the US, is appropriately located just above the altar to Bel.

Ponder these images, which were posted hours before the blood-moon eclipse of Jan 20, 2019.

Below is the video that brought to my attention the connection of the New York abortion bill with the One World Center Tower of Babel lit pink.