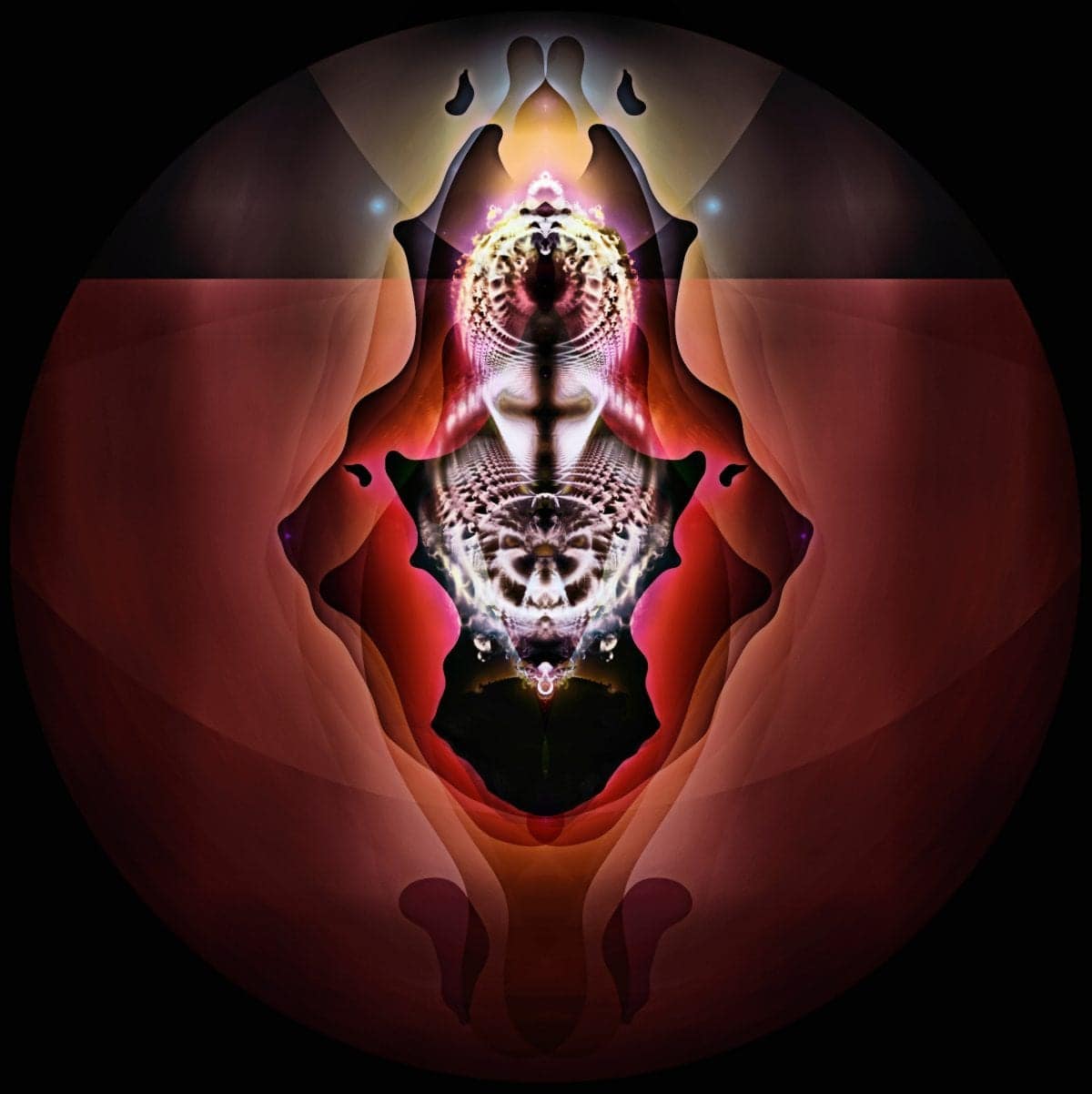 Click here for Part Two ‘B’, “Take the beam out of your own eye”

The prophets were often asked by God or by an angel what they saw when shown a vision.

By asking the prophet what he saw enlists him in the process of decipherment. “Participation” is the way of the God of love and truth.

I can’t understand why others don’t see

I am shocked when someone asks me what a particular fractal image is supposed to be a picture of. To me, it is obvious, as is the interpretation.

I remember putting out the first fractal publically three years ago at the funeral of my father. The response: “The music that went with it was nice!”

The Christobrot fractal is solely the product of a mathematical formula. At times two or more overlapping fractals come together, but when they do they observe strict rules.

We start with the below image because the mathematical formula is extremely simple and there is very little that is enhanced.

Three raw images are displayed below. (The second and third are the same thing, but with different colors.) In the fourth image, the first two are overlapped and enhanced.

The math that produces the second image is the same as for the first image, except with minimal “iterations” in order to bring out what otherwise gets washed away by the 700 million specks of light.

In other words, the final product (the fourth image) is the result of a single formula, but with the first seven iterations emphasized.

What do you see?

Before I tell you what I see, allow me to say this: The visionary dream given to King Nebuchadnezzar of Babylon as he slept is a type and foreshadow of the full composite fractal. (The above image is still just a sliver of the whole.)

This is the Vision of Jesus Christ that passed through his head on the day of His sufferings when He cried out upon the cross while darkness enveloped the land — a darkness that can be felt — like an eclipse of light itself, but without sun or moon.

Now from the sixth hour until the ninth hour there was darkness over all the land. And about the ninth hour Jesus cried out with a loud voice, saying, “Eli, Eli, lama sabachthani?” that is, “My God, My God, why have You forsaken Me?” (Matt 27:45-46)

Whether Jesus was actually confused as He suffered, I do not know. Either way, real or symbolic, the darkness of confusion and forgetfulness clouded His mind, as it did the king of kings, Nebuchadnezzar.

And in the second year of the reign of Nebuchadnezzar, Nebuchadnezzar dreamed dreams, wherewith his spirit was troubled and his sleep departed from him.

2 Then the king commanded to call the magicians, and the astrologers, and the sorcerers, and the Chaldeans to show the king his dreams. So they came and stood before the king.

3 And the king said unto them, “I have dreamed a dream, and my spirit was troubled to know the dream.”

4 Then spoke the Chaldeans to the king in Syriac, “O king, live for ever! Tell thy servants the dream, and we will show the interpretation.”

5 The king answered and said to the Chaldeans, “The thing is gone from me. If ye will not make known unto me the dream with the interpretation thereof, ye shall be cut in pieces, and your houses shall be made a dunghill.

Jesus is now glorified, just as John saw Him in the Book of the Revelation of Jesus Christ, (Rev 1:1-3).

As said in the previous post, Jesus is both the revealer and the revelation. And He makes known what He has seen to men by angels on assignment. He knows now ‘the thing that was gone from His mind’ upon the cross that terrible day. And He reveals it to men; partakers in the glory to come.

But there is a God in heaven who revealeth secrets, and maketh known to King Nebuchadnezzar what shall be in the latter days. Thy dream and the visions of thy head upon thy bed are these:

As for thee, O king, thy thoughts came into thy mind upon thy bed, what should come to pass hereafter; and He that revealeth secrets maketh known to thee what shall come to pass.

But as for me, this secret is not revealed to me for any wisdom that I have more than anyone living, but for their sakes who shall make known the interpretation to the king, and that thou mightest know the thoughts of thy heart. (Dan 2:28-30)

Please read the rest of Daniel 2 to know what he dreamed and the interpretation.

But essentially he saw a statue made up of four sections of decreasing worth but increasing strength: a head of gold, a breast of silver, a belly of brass, and legs of iron, but with feet of iron mixed with clay.

Then a rock strikes it upon the feet that dissolve the statue. The rock becomes a mountain that fills the whole earth.

The rock is Christ, and the mountain is His eternal kingdom that replaces the kingdoms of men.

The Christobrot is similar in that it presents successive animals from top to bottom, like a totem pole, and on either side. Each animal symbolizes an aspect of Christ and His kingdom. Each animal is real, however. They are living creatures that surround God’s throne. But we are talking about interdimensional beings, so do not expect an exact parallel to our world of limited perception.

So what do I see?

I see different creatures that resemble animals who surround the throne of God, each symbolic of Christ. His kingdom now rules all, the rock that became a mountain.

I will interpret for the Lord, (although He knows all). And I will just talk about the lamb for now.

Lord, in your vision you saw a lamb upon a throne surrounded by living creatures. The one below looks like a bird of prey with many eyes and the one above the lamb looks like a leopard. Each is covered with eyes.

The Lamb is clothed with the feathers of the bird of prey that is below it, as with a royal garment.

The mark of the cross is over the lambs’ face so that the crossbeam covers his eyes, and the vertical beam stretches from his forehead down to his mouth. The lamb has two horns and is covered with hair like wool.

There is much more, Lord, as seen in the full image of the lamb upon his throne.

(See below image. Try to locate the image of the above lamb with the below full fractal. Behold how the Lamb cries out.)

Then I saw a Lamb, looking as if it had been slain, standing at the center of the throne, encircled by the four living creatures and the elders. (Rev 5:6)

Lord, you are that Lamb.

The cross was before your eyes, but also the glories that would follow. You are the Lion and the Lamb upon the throne.

The cross is “the beam in your eye” that you bore for men, their substitute. It stops you from seeing the sin of those who follow you wherever you go, (Matt 7:4-6; Rev 14:4).

Click here for Part Two ‘B’, “Take the beam out of your own eye”

And, The Christobrot Fractal: Lamb on the Throne and California Quakes July 6, 2019