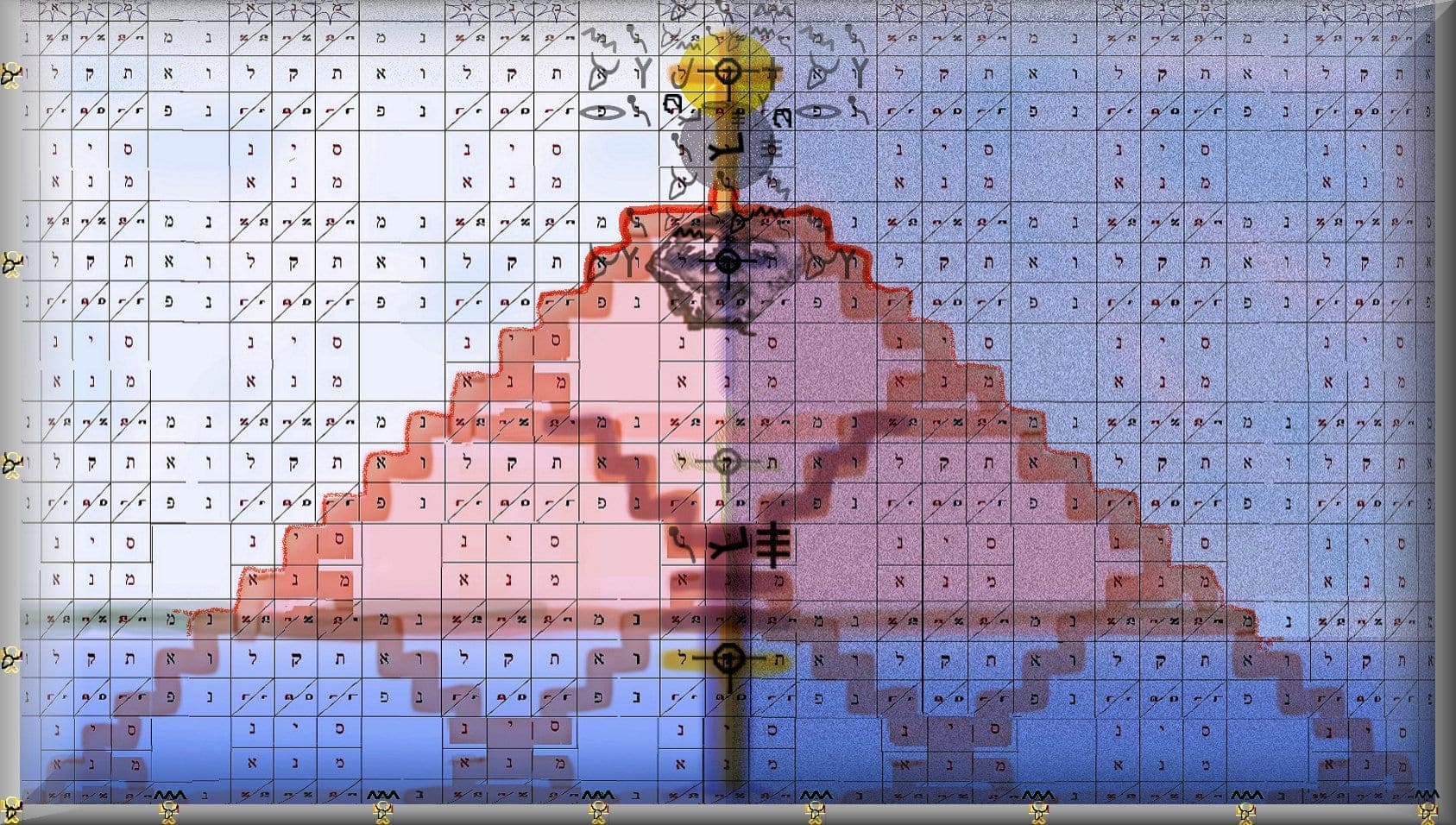 This is “Part Two” of Four parts

Building upon Part One, after a brief look at Islam and Catholicism we will ponder the seven seals of the Lamb broke open and the Tower of Babel as a mountain with an altar atop. All of this is encoded in the Mene Tekel Uparsin wrighting on the wall.

We continue with the theme of ‘the pronouncement that the gods of each era are judged’.

As we shall see below, the words Islam אִיסְלַאם, Isis, Ishtar and Inanna all begin from the same letter, Aleph א, found at the lower left side of the moon. 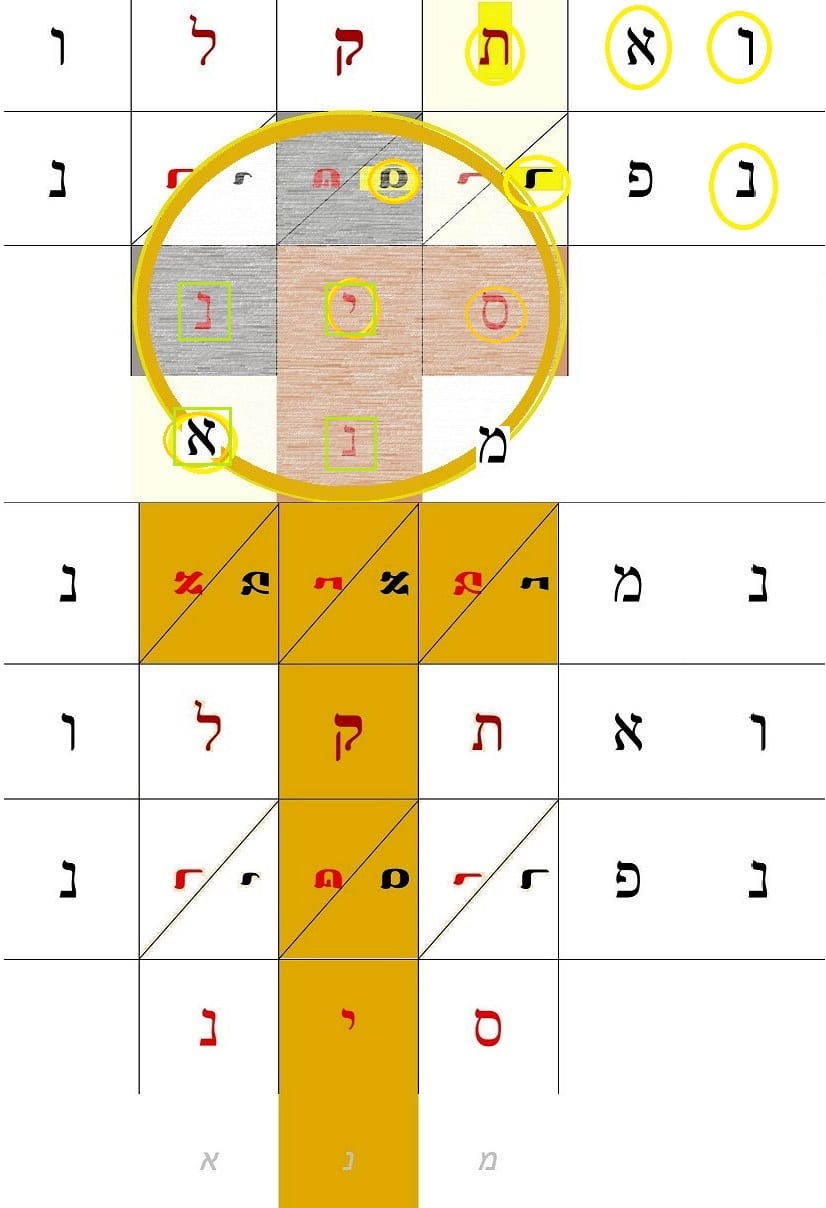 Regarding the above image: The moon sits precisely above (or below) the cross of Christ. When above, the shape of the Egyptian “Ankh” is formed. Locate the letters “אנק סינ”, “The Ankh of Sin” (the moon god). Thus, Sumerian and Egyptian mythology are combined and then mixed with Islam. This is the “mystery of iniquity”  that spreads from one epoch to another and one kingdom to another. (2Thess 2:7.)

The words “The mystery of iniquity סתר אָוֶן” are contained in the matrix of the wrighting on the wall.

Remember the horizontal cylinder effect when searching for סתר אָוֶן.)  On the crossbeam, locate,  “The faith of the Imam .” (אִמאם or אמנ אממ). “The Imam אִמאם” is the name of the Islamic clergy.  In full, “איסתר אונ Ishtar of Heliopolis”, thereby identifying Isis איסיס with Ishtar איסתר and the morning/evening star Venus.

Strangely, just hours after posting this document, this happened:

The space rock exploded with 10 times the energy released by the Hiroshima atomic bomb. (BBC)

The word, Isis איסיס and Inanna איננא (alternate name for Ishtar), both names, therefore, sit exactly within the circle representing the moon. Thus, the predicted Islamic terrorist group “Isis” is a play on words for the goddess by the same name.

The letters, “From the Koran מקורנ” forms a mountain and valley, and when repeated, forms the shape of a long serpent when rolled out using the cylinder-seal effect and is a play on words for Kur (the underworld). (“Kur” and “Koran”.)

“Sīn /ˈsiːn/ or Suen or Nanna was the god of the moon in the Mesopotamian religions of…Babylon … His wife was Ningal (“Great Lady”), who bore him Utu /Shamash (“Sun“) and Inanna (איננה) /Ishtar (the goddess of the planet Venus). Wiki. (Also article about “Sin-god” in The Encyclopedia Britannia.)

But the same letters that read, “From the Koran”, also read אנ מקור or אנ מאקור, “Anu from the Kur (underworld!)” or “Anu from the mountain-house proclaims the Koran!”. (“Mountain house” refers to a ziggurat, that is, a tower like the tower of Babel.)

Notice the word, “From the Kur/underworld מקור” is appropriately located at the bottom of the mountain, and reads in a descending direction מקור.

Furthermore, the ‘hills’ when read backward and forward:

“Anu refused the rising light. He declares the Koran from the Mountain-shrine, An(u) from the underworld!”

The two images below are intended to be viewed as if one image. Thus, the circle represents the moon and is overtop the hills with the serpents on it. 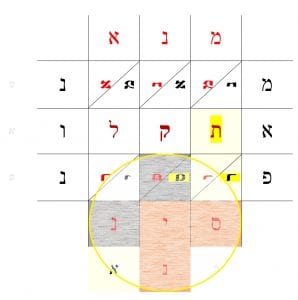 Its mouth reaches to the top of the Ziggurat (Mountain-Shrine). The serpent also is on the cross at the top level. ‘A serpent on the cross’ symbolizes the accursed serpent of the garden of Eden.

As seen below, the middle of the serpent reads “Seraph” (“a fiery serpent”) and will be discussed later in this article.

“Ouroboros” (Counterfeit of “The First and the Last”)

“Ouroboros” is where a serpent swallows its own tale.

Osirius and Ra are the first known ‘Ouroboros‘.  Amazingly, this is what we see here, and the letters can be traced in two ways. אוסיריס ורא (“Osirus and Ra”) or רא אוסיריס (“Ra-Osirus”).

Moreover, the word “סרפ” (Seraph/Serpent) is located within the outline of the serpent “Ra-Osirus”. As is Apophis, the serpent/dragon. (We discussed Apophis already but will do so again shortly.)

Both serpents ascend the sides of the mountain. Both surround the cross. Both come forth from the moon/Sin and the underworld.

“The text concerns the actions of the god Ra and his union with Osiris in the underworld. In an illustration from this text, two serpents, holding their tails in their mouths, coil around the head, neck, and feet of an enormous god, who may represent the unified Ra-Osiris.” רא אוסיריס Wiki

“An important Sumerian text (“Enlil and Ninlil”) tells of the descent of Enlil and Ninlil, pregnant with Nanna/Sin (Moon-god), into the underworld. There, three “substitutions” are given to allow the ascent of Nanna/Sin (moon-god).” Wiki

“Mene, Mene” on the way to Mecca

Below is quoted from an article by the British Museum. Notice the prominence of “Mina” (i.e., “Mene”). (The camps at Mina are “divided” by country.)

1. Miqat. Arrival and change into ihram

Circling the Ka‘ba (tawaf). Passing between the hills of Safa and Marwa (Sa’i)

Stay over night. The rituals of Hajj

5. ‘Arafat to Muzdalifa. Collecting stones and stay over night

Circling the Ka‘ba. Passing between the hills of Safa and Marwa

8. Mecca to Mina. Stay for two or three nights

The gods of Rome

We will not go into depth about Roman Catholicism, but around the letter “Tav” the rising sun is formed much the same as the setting moon is shaped around the “Yod” as seen before. Another “ankh” symbol is formed except with the sun rather than the moon.

This time the message is about Roman Catholicism and incorporates the pantheon of Babylon, and Greece. It concerns “the mystery of the Eucharist/Mass”. (Note: I have not taken the time to outline this specific image as I did with Islam.) 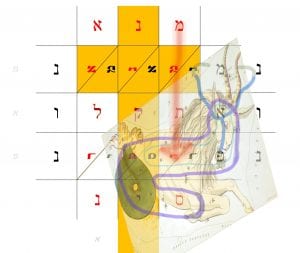 However, it has the horns of the Greek god Pan פנ/Min (using horizontal cylinder) and overlaps the body of Aphis אפס the bull פר of Egypt and RA רא, and סינ and so forth — a monstrous hybrid.

The One putting it to death ממתו

A spear named, “The One putting it to death ממתו” pierces the dragon, which phrase is also an acrostic ממתו for Mene Mene Tekel Uparsin. But it can also read מנתו-רא “Montu-Ra“, (and even אמנ-מנתו-רא “Amun-Montu-Re”), the name of the Egyptian solar deity, “god of war”,  that slew Apophis the dragon/serpent, but who was replaced by Amun, his “father”.

The Greeks considered Montu to be a form of  אַרֵס Ares, the god of war.

(The ankh looks like the cross, but it actually replaces the cross. Hence the Tav is just to the right of the true cross.)

The walls/steps that outline the mountain-house (Ziggurat) image below, refer to Ninevah and much more. At the right side, it refers to Rome and Reme.

Romulus and Remus were brothers. The story of the founding of Rome appears to recall the story of Cain and Abel in the pictogram. In this sense, Abel is the one sacrificed atop the mountain — a foreshadowing of Jesus.

Rome was the city built upon “seven hills”. Mecca, Rome, Babylon, Ninevah, Thebes, Eridu, Enoch — throughout the ages a city has arisen that dominates the rest of the world. The mystery of iniquity strings them together. Each city is “the place of the skull”, a symbol of death. (The skull reads, “The Place of the Skull” in Aramaic.)

We will skip over Assyria. But the “Waters of Ninevah”, and “Nisroch/Nimrod”, and so forth form a mountain-Ziggurat. (See above image.)

Phrases from the book of Nahum are especially present within the walls. Recall that Jonah was swallowed by a large “fish” and redirected to Ninivah.

In Nahum 3:8, Nivevah is compared to the fall of “No-Amon” of Egypt. Are you better “than No-Amon  מִנֹּא אָמֹון”.  (“No-Amon” is just another name for Thebes.) 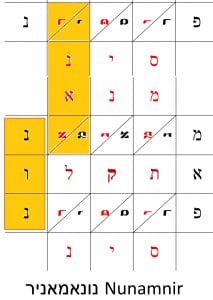 “Enlil (Nunamnir), is the god of wind, air, earth, and storms and the chief of all the gods. He is theologically conceived as the “transcendent” facet of Anu.” (Wiki)

Or, in other words, he is “Ruler of the Cosmos”; “Nunamnir, king of heaven and earth”, “He who decrees fates”, that is, an imposter of Jesus, the true Son of God.

Compare the above with what we said earlier, as shown again here below.

The following quotations are from Wiki “Sumerian Religion.”

Towards the end of Sumerian civilization, these temples developed into ziggurats—tall, pyramidal structures with sanctuaries at the tops.

The Sumerians believed that the universe had come into being through a series of cosmic births.

First, Nammu (Namma), the primeval waters, gave birth to An (Anu) (the sky) and Ki (the earth), who mated together and produced a son named Enlil. Enlil separated heaven from earth and claimed the earth as his domain…

At first, there is only Nammu, the primeval sea. Then, Nammu gives birth to An (the Sumerian name for Anu), the sky, and Ki, the earth.

“A sacred symbol of Nut was the ladder used by Osiris to enter her heavenly skies.” (In our word puzzle, the cross is the bridge/ladder instead! Osiris is in the code
too, as are most all others.)

“In Egyptian belief, the disorder that predates the ordered world exists beyond the world as an infinite expanse of formless water, personified by the god Nun.” (Recall the word, “Nun”!)

Next, we look at the seven seals of the book of Revelation and the four horsemen of the Apocalypse as outlined and imaged in the Mene
Tekel Peres code. (Part Three)

Click the link to continue on to “Part Three“

Click here for Part One of the Mene Tekel articles 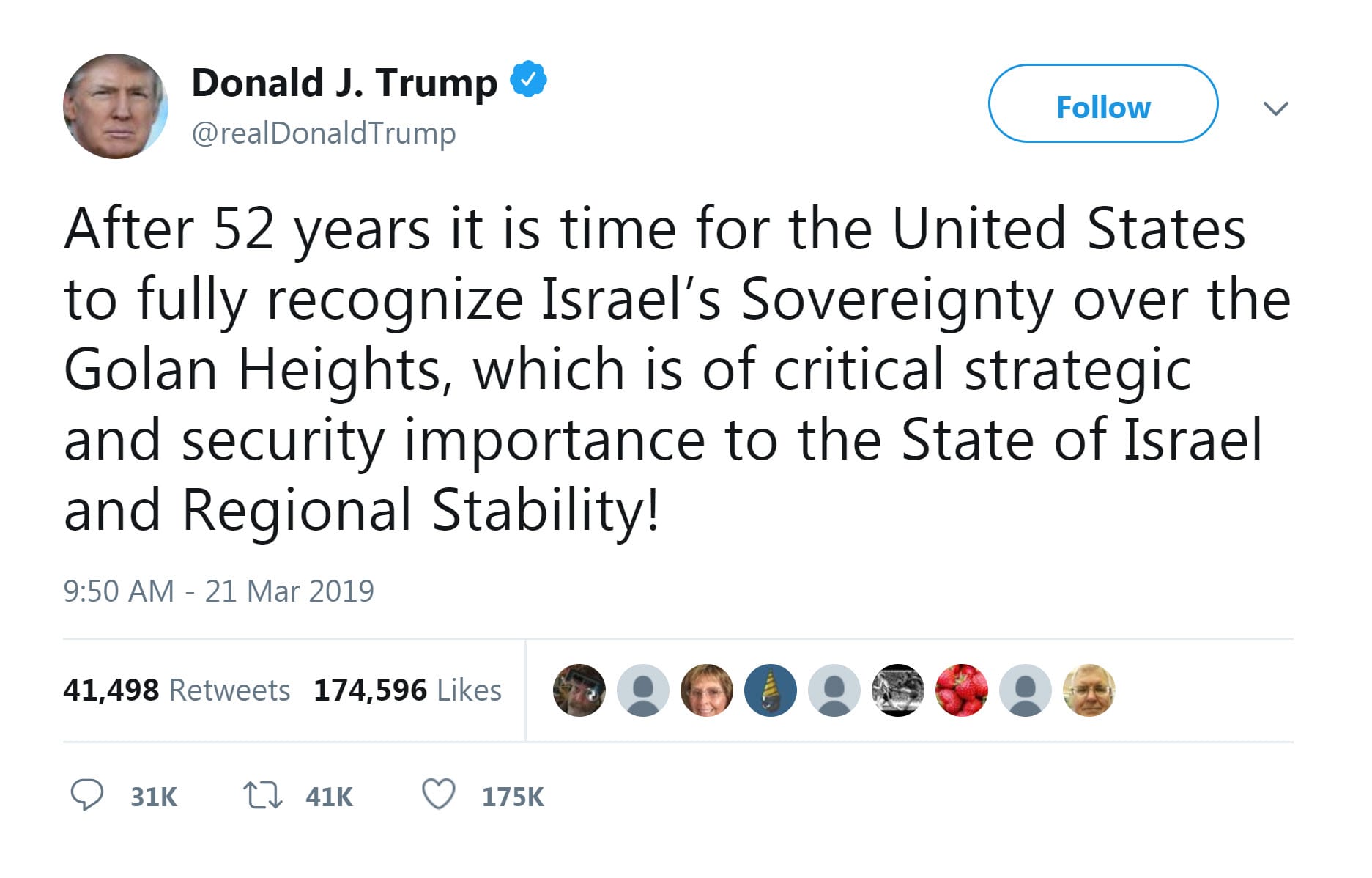 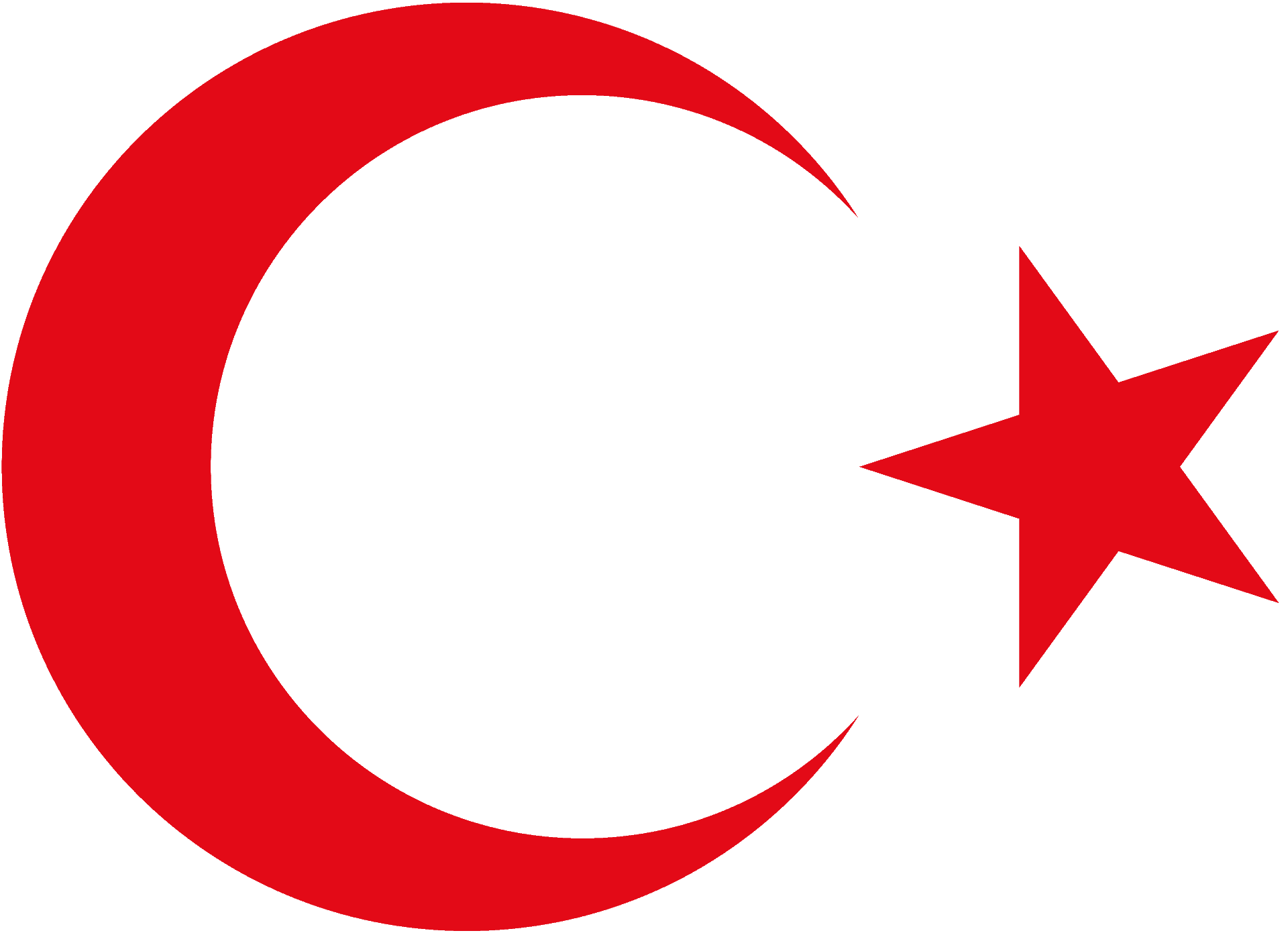