Mathematicians and geeks everywhere celebrated a rare occurrence Sunday, 02/02/2020, a kind of 8-digit palindrome that hasn’t happened for more than 900 years.

A palindrome is any sequence, phrase or word that reads the same backward as forward. And 02/02/2020 is considered a “universal palindrome” because it reads the same whether written as “Month/Day/Year” as the United States does, or “Day/Month/Year” as many other countries do.

I would not have mentioned this, it seems silly, but the Lord brought it to my attention — and who am I to tell God what He can or cannot do.

In the previous post, I talk about the earthquake in Cuba on Jan 28, 2020. I said that there elapsed 400 days from the Dec 22, 2018, Anak volcano that killed 400 people to this 7.7 earthquake around Cuba. It was just a small point within a big article. However, it turned out that I counted wrong. There actually elapsed 402 days, not 400.

I counted wrong because the calendar in the prophetic image goes forward (left to right) but the Hebrew right to left — and so I got it mixed up.

(Update to the above caption originally posted January 27th, 2020:

Someone may say, “You are reading into it after the fact”.

But before eight witnesses on Saturday, Feb 1, 2020, I prayed aloud that God would shake the stock market of China and use the virus to mercifully turn men to repentance, and then quoted Hagg 2:7-9. Know that God did not hear my cry, rather the cry of persecuted Chinese Christians, whom He loves.

This does not mean that one should run out and sell their stocks. ‘Avoid extremes’ is always the best advice.)

But it was so perfect, I thought.

The letter that designated the date of the quake in the prophetic image also overlapped the location of where it occurred — a stunning improbability. (This will make more sense later in this post.)

However upon further study, other things did not add up and so after much effort, I retraced my steps today and found my error.

Close, but not exact is not good enough.

Then I thought, well I will delete that part of the post because it is not the main point anyhow. Yet somehow, the way that I counted forward and backward at once to arrive at this mistaken two-day gap — well, it all seemed like a God-thing somehow — a two-day delay for some reason. So I wondered if the Lord had His hand in my two-day mistake for some reason.

Moreover, the date is based upon the repetition of 02 or 20.

(Even the day and month, can be reversed.)

My conclusion about the two-day miscount?

The 2-day error regarding the 20-year gap in “the Writing on the Wall” is, I believe, God’s way of declaring that He can reverse time if He wants to, symbolically or literally.

Never put God in a box.

And so I deleted that part of the post today about the 400 days. Instead, I am reposting it here below — unedited.

The excerpt will be difficult to understand without the context of the previous post from which it was copied.

To me, this 8-digit palindrome simply reinforces the “mystery” all the more.

Speaking of “8”. There were 8 souls on Noah’s ark. Did not Shem and Japheth walk backward to clothe their naked father? (Gen 9:23)

Jesus looked at them and said, “With man this is impossible, but with God all things are possible.” (Matt 19:26) 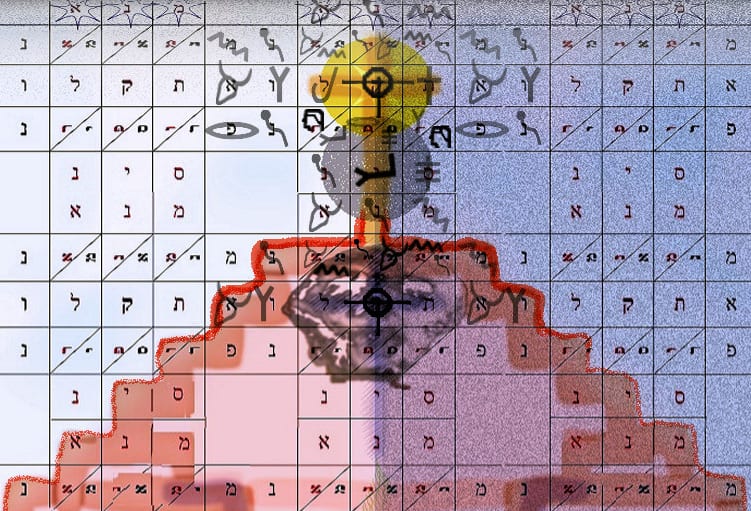 This is a blow-up of the top of the hill/mountain of the earlier image. The image is from earlier this year. Click to enlarge. In the image, beneath the darkening sun is another cross overlapping the skull that literally reads, “Golgotha”, where Jesus died. Golgotha translated means, “Hill of the Skull”, that is, “Mount Calvary/Skull”. The “Tekel” centered on the skull is the same Tekel superimposed over the prophetic map. Thus the earthquake occurred just to the left of inside the center-square of Te-k-el — at the center of the skull on the hill.

These three Hebrew letters are also ancient pictographs. Hebrew reads from right to left (although the calendar-dates run left to right), and thus “Te-k-el” is a pictograph of ‘the Cross’; next letter “K”, ‘the setting and rising sun’(and thus the quake occurred just where the sun rises in the image (i.e., right side of image is darkness and left- is light), and lastly the letter “L” in Hebrew, which was a pictogram of a ‘Shepherds staff‘. You can spot the same three pictographic letters five rows above the skull running through the center of the sun. Because, profoundly, in the image, Christ rises left to right, right to left, up and down, down and up (note the four crosses) — all at once — for all mankind!

Again, note the calendar of events image and the same middle tekel AND the same middle letter of the quake. The date of that same letter is Dec 22, 2018. This was the “Second Sign: The Eruption of Mt Anak”. (Note eruption in the above skull image.) The sign of Mount Anak had a lot to do with the number 4 and 400. It happens that 400 days after Mt Anak is this earthquake on Jan 28, 2020, and centered on that same letter geographically!

As said in that post, the Anak volcano draws attention to the Biblical Anak:

Keep in mind that Anak’s father, Arba, is called “the greatest of the Giants/Anakim”, and his name means, “Foursquare”, or “four”.

The link address for this earlier Anak post says it all: Note the embedded number 400. 1260d.com/2019/01/07/anak-krakatoa-the-giant-kills-400-mene-tekel-code/ As it says in this post, the image of the hill of the skull erupting was posted for the first time just hours before the eruption.

I know its complex so I will keep it short. The full prophetic map that encompasses everything is made up of six levels of these earth-maps, each span 100 days.

Because the Cuba earthquake occurred 400 days after the Anak Volcano, thus it lands on the same position four maps down — that is, on the cross-beam (“Tekel”) of the cross, just as did the New Zealand Volcano 50 days earlier, and as did the post explaining the Christobrot fractal 100 (and 110) days earlier (thus centered around the July 4th and 5th, 2019, California quakes) — which consequently overlaps both the mouth of the Lamb (AND the Lion) on the Throne. The revelation of the Christobrot fractal, therefore, was predicted ahead of time, as was everything else.

The original article in full: