This is an update to the last post from three days ago: “Mercury: Sign of Armageddon“. It’s best to read the following in the context of that post.

Some images may take a minute to load.

Today, on 11/11/11, Remembrance Day, even as Mercury passed in front of the sun, the Lord reminded me of an earlier post from half-a-year ago. It was about a comet that depicted a sign in the heavens of multitudes on the Day of Atonement slain.

The Day of Atonement was just a month ago.

“The angel swung his sickle on the earth, gathered its grapes and threw them into the great winepress of God’s wrath.” Rev 14:19

Notice the sword/comet in the hand of Virgo and the loop of Mercury in Libra where a hand would hold the balance thereby emphasizing “weighed in the balance”. (The looping effect is called a retrograde.) “Weighed in the balance and found wanting” is also the meaning of the name of that bright star that Mercury loops beside.

Notice the cup of wrath and bird eating the flesh at the lower right corner.

It’s the story of armageddon told in the heavens.

It’s what could have been, and soon will be.

Below is a better image of the sword-swinging action in the hands of the angel (Virgo with wings) on the Day of Atonement, 2019. (See “Day-of-Atonement Comet is a sickle, sword, and scepter in the hand of Virgo“, posted half-a-year ago on May 12, 2019.)

Also, recall the below “Prophetic Map”.

It happens that “Typhoon Descending Dragon” peaked in power over the “sea” (ocean) located along the rod just above the right hand of Virgo, where the comet-sword swings brightest.

In that day the LORD with his sore and great and strong sword shall punish leviathan the piercing serpent, even leviathan that crooked serpent; and he shall slay the dragon that is in the sea. (Isa 27:1)

At the start of this year, I said to expect signs to occur in the future in keeping with this prophetic map.

The path of Mercury follows the green line (ecliptic) down. Mercury made a loop at the top of the green line three months ago (when Pi-of-Time was discovered). And now again it loops at the bottom of the earth at the Balances/Lybra.

It symbolizes this: ‘the devil is cast down from heaven and soon into the bottomless pit’.

These are signs of things still to come. They could take place now, but God is delaying for the sake of souls.

Below is one of the many signs this year that repeat the same message.

“Cast down from heaven.” Is it merely a reminder, or in some sense true at this time? 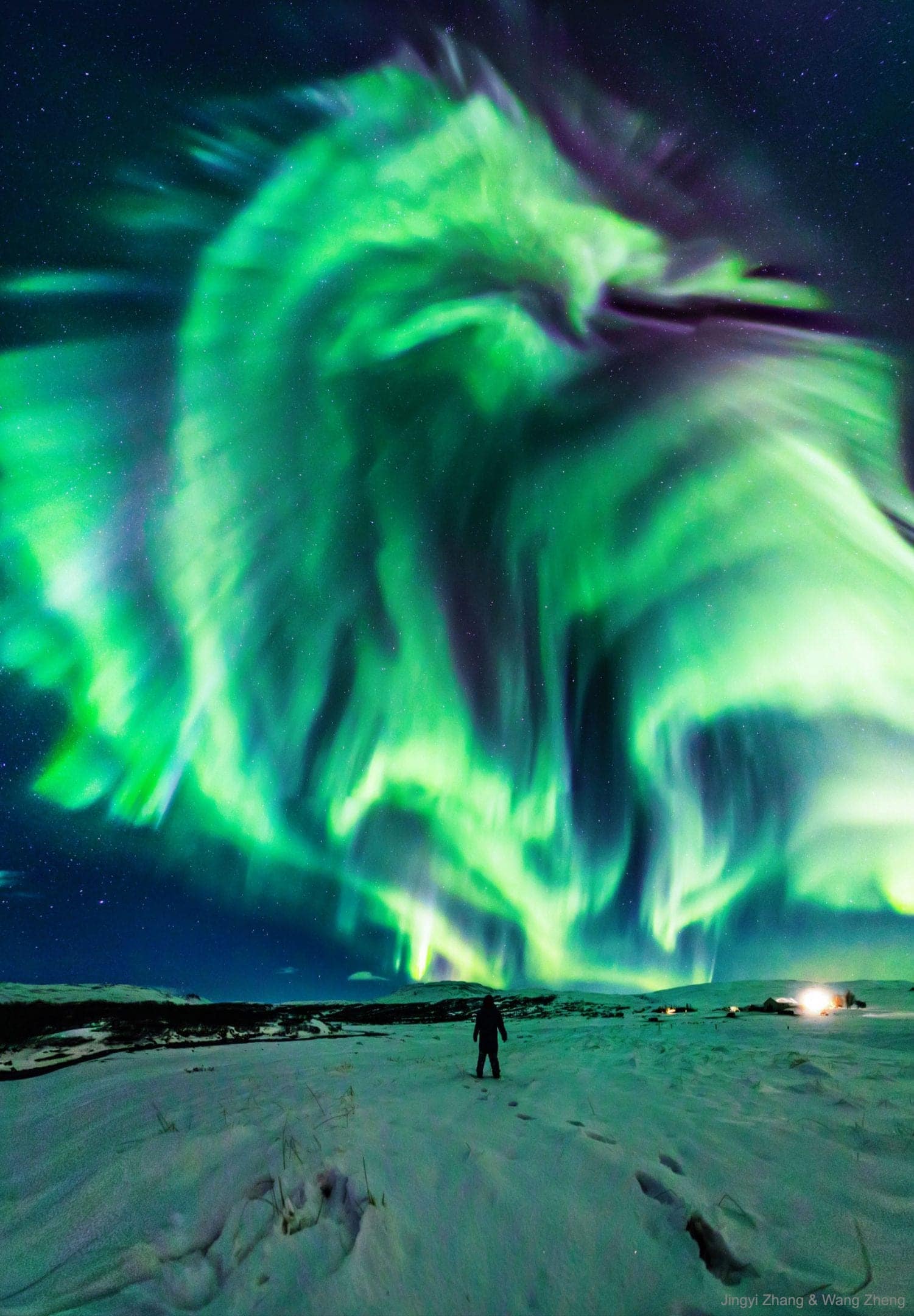 A mesmerizingly beautiful dragon-shaped aurora appears in Iceland skies, shared by NASA. (Jingyi Zhang/Wang Zheng photo on Feb 6, 2019.) “No sunspots have appeared on the Sun so far in February, making the multiple days of picturesque auroral activity this month somewhat surprising.” (Curiosmos)

If you locate Iceland on the prophetic map (where the photo of the dragon was taken) you will notice that Iceland is located at the top of the overlayed spear of Pollux.

This is also where Mercury made a near-perfect circle (retrograde) symbolizing the dragon cast down from heaven.

St Louis is an example of snow and record-cold. The same night that record cold occurred there, the roar of a bright falling star was both seen and heard.

It is the largest arch in the world at 630 feet. If it were a full circle it would be 1260 feet in diameter. It coincided with the peak of the Taurids meteor shower (falling stars).

Part of the Pi formula:

Among other things, the formula refers to the release of the Nephilim from their prisons after “seventy generations“, i.e., 4900 years. (A generation is 70 years in the book of Enoch).

Many scholars believe that Enoch was represented by the planet Mercury in antiquity, although corrupted under other names such as Thoth or Nabu. This is why Wednesday, “the middle of the week” is derived from the word Mercury. (Most festivals occur on Wednesday in the book of Enoch, including the start of each season.)

All that Enoch symbolized was fulfilled by Jesus the Messiah. All Christians walk in Enoch’s shoes as part of “the Body of Christ”.”Or do you not know that we will judge angels?” 1Cor 6:3.

And to the Jew…