For the past 30 years, I have said repeatedly to expect signs to occur towards the year 2025 — the 70th jubilee from when Israel entered Egypt. The sign of the 500 scorpions symbolizes what could have been the countdown of “1260 days” until the return of Christ. However, it appears to only be a token event —  a warning.

Those who have followed my posts over the years will quickly understand what I say in this post. But I refuse to labor it.

First, acquaint yourself with what happened during the night from Friday evening till Saturday morning, Nov. 13, 2021. (Also, these storms continued for a few days after this.)

As I have been saying, events are happening in accord with patterns leading up to 2025 — the 70th jubilee from when Israel entered the Promised Land. They are occurring on the Prophetic Map, and this includes the Picture Bible Code chart from 15 years ago. I have spoken about this several times in just the past few weeks.

A flood of rain occurred on this night, with hail, and over 500 scorpion stings in the land of darkness, that is Aswan, Egypt.

We are interested in the exact time of this sign so as to plot it on the Picture Code.

Severe thunderstorms that rolled across southern Egypt this past Friday unleashed flooding, strong winds, hail and hordes of venomous scorpions.

The storms caused damage across the region primarily due to flooding, but the most notable impact came when the pouring rain drove the poisonous scorpions out of their burrows and into homes. According to reports, the scorpions went on a stinging spree, which resulted in more than 500 people being sent to hospitals for treatment.

The city of Aswan spent the night in the dark after the storm knocked out a power supply station. Yahoo News

This incident reminds us of the pattern of Revelation 11.

And I will appoint my two witnesses, and they will prophesy for 1,260 days, clothed in sackcloth.” 4 They are “the two olive trees” and the two lampstands, and “they stand before the Lord of the earth.” 5 If anyone tries to harm them, fire comes from their mouths and devours their enemies. This is how anyone who wants to harm them must die. 6 They have power to shut up the heavens so that it will not rain during the time they are prophesying; and they have power to turn the waters into blood and to strike the earth with every kind of plague as often as they want.

The next chapter refers to the dragon that spews a flood after the woman who gave birth to Christ. The flood upon Egypt reminds us of this as well. However, it is the Picture Bible Code that makes this explicitly clear.

She gave birth to a son, a male child, who “will rule all the nations with an iron scepter.” And her child was snatched up to God and to his throne. 6 The woman fled into the wilderness to a place prepared for her by God, where she might be taken care of for 1,260 days.

13 When the dragon saw that he had been hurled to the earth, he pursued the woman who had given birth to the male child. 14 The woman was given the two wings of a great eagle, so that she might fly to the place prepared for her in the wilderness, where she would be taken care of for a time, times and half a time, out of the serpent’s reach. 15 Then from his mouth the serpent spewed water like a river, to overtake the woman and sweep her away with the torrent. (Rev. 12)

Ponder the Picture Bible Code from 15 years ago

Slowly over the years, I have put less emphasis on these signs and even less on explaining myself. It just does not bear much fruit. So I will keep this short by quoting from a comment I made a week ago (just before this sign in Egypt). It will supply any “proof” you may desire.

Here is the quote from the comment that was several days before this sign in Egypt. The comment I made had to do with another sign, that one in Israel. It supplies all the information needed to see how Feb. 13th, 2021, symbolizes “1231 BC”, which is the center of the code and the mouth of the dragon.

Today, the day of this article about the anointing oil for Messiah corresponds to symbolic 1206/1236 BC (Symbolic Day Year). I have been anticipating this very day for several years, expecting some sign.

On the Bible Code Chart from 20 years ago, 1206 BC corresponds to the middle of the base of the Menorah — where the main branch comes forth that reads, “She is the Queen” in Hebrew. Symbolic 1236 BC overlaps the serpent/dragon, and six days ago when this was first announced is the exact center of the dragon. We are gearing up for “the anointing of the Holy” as per Daniel 9:24-27.

The below Bible-Code chart uses the 360-calendar. (See, 360calendar.com) Notice that today not only symbolizes this letter on the Menorah Code, today is also Chanukah on the 360-calendar (“9th month, 25th day). Compare this to what is said to today’s article on Israel365news,

“Rabbi Hillel Weiss, the spokesman for the Sanhedrin, announced the beginning of the anointing oil project last week appropriately enough just before the holiday of Hannukah in a sermon he gave on the Temple Mount. Rabbi Weiss emphasized that a Kohen Gadol (High Priest) and Temple utensils will be anointed when the Temple service begins, which does not need an actual Temple structure, only an altar.”

For the whole code about the Menorah — which is symbolic of the union of Messiah with His bride — see Burning Bush Bible Code.

This is the end of the quote.

A Plague of darkness is coming

Below is the CNN map for this incident that marks the province of Aswan where the storms occurred.

Compare it with the sign of the total solar eclipse that will cross this same area in six years — which I spoke of at length in a series of articles four years ago.

Notice the green marker of greatest totality over Aswan. It is the same spot marked by CNN for where the scorpions and storms occurred. Remember, darkness was also one of the plagues upon Egypt. 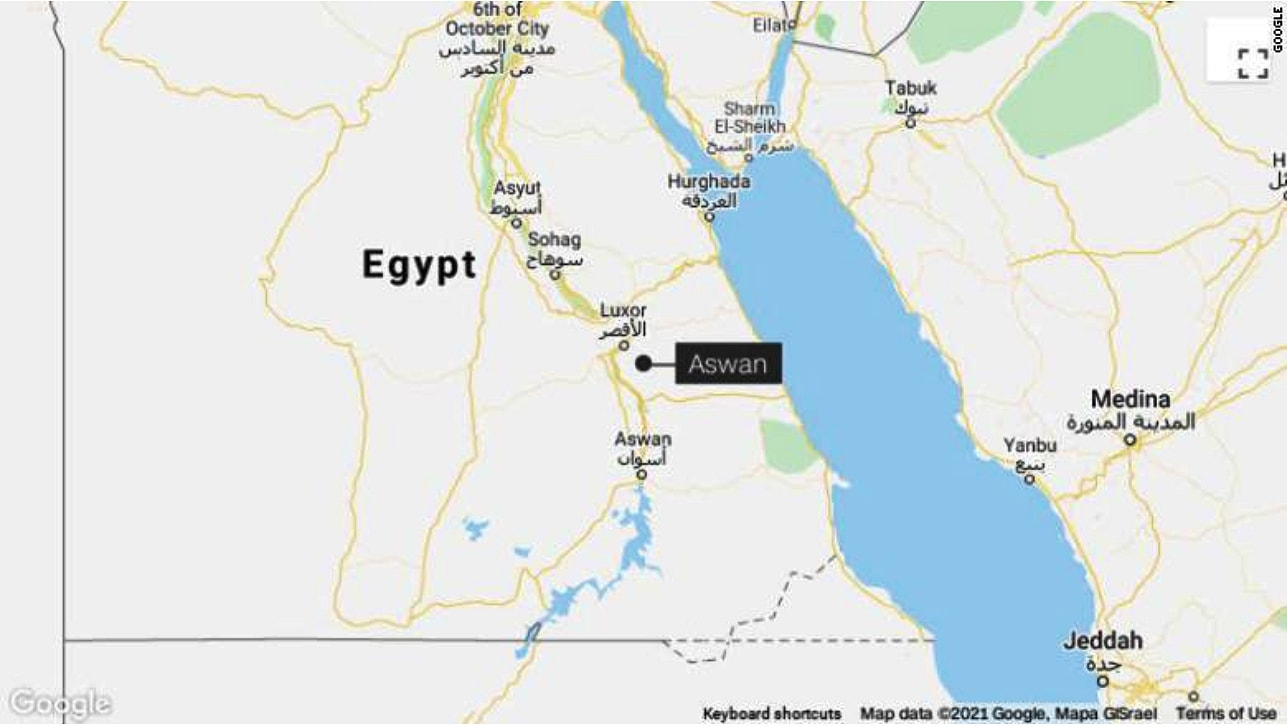 Locust, Scorpions, and the Darkness of Ra

They (the locust) had tails with stingers, like scorpions, and in their tails they had power to torment people for five months.

Recall the locust invasion upon Mecca two years ago. It happens that in 2027, Mecca will be eclipsed by the sun an hour after Aswan! (See the above eclipse map.)

In this way, seemingly unrelated events connect throughout history to tell His story. Jesus took upon Himself our plagues in His flesh upon the cross that whosoever looks to Him is saved from the wrath of God. Jesus is the “anti-venom” that makes you whole!

The next post will show how that the birth of Israel in 1948 and the recovery of Jerusalem as its capital in 1967 is also connected in Christ using the Ezekiel Code.

14 thoughts on “Why Egypt was just plagued with darkness, hail & scorpions”