As I said in the previous article, at the end of each post in this series, extreme events that occur that are related to the Enoch Calendar are briefly summarized.

The literal “seventy weeks” (490 days) prophesied last year about this time unto Hurricane Michael and the Paradise Fire.

If these conditions…persist…this (fire) could well turn out to be one of the U.S.’ costliest weather and climate disasters, exceeding the damage caused by recent major hurricanes such as Katrina, Sandy and Harvey. (AccuWeather)

Said Dr. Joel N. Myers, founder and president of AccuWeather, “This is a serious humanitarian as well as economic disaster for the state of California, possibly rivaling the negative impacts of the great earthquakes there. (AccuWeather)

These two events are among the two most severe in American history.

Below is the chart found in the article from last year entitled: “(Pt. 2) U.S. Pattern of Disasters Revealed Beforehand.” (As you can see by the link address, it was put out exactly 360 days before Hurricane Michael.)

The chart in that article contains the pattern for the prophecy. With a little effort, you can figure it out for yourself. Just make sure that you use the 360-calendar.

Why start from the deaths of Aaron and Moses?

As said before, there are different types of “The Two Witnesses” (of Rev. 11). Moses and Aaron is an obvious one. Aaron was the mouthpiece of Moses who brought plagues down upon Egypt.

Moses died exactly half-a-year after Moses, just before they enter the Promised Land, (1406 BC). The Bible tells us that “Moses was 80 years old and Aaron 83” (Exod. 7:7)  when the plagues began half-a-year before the Exodus of 1446 BC. Therefore, do the math — Aaron is 3.5 years older than Moses.

The plagues upon Egypt and destruction of Canaan together are a type of the End of the World. It carries the same meaning as the fall of Babylon in 539 BC. (See Rev. 18.)

And immediately before the Promised Land is taken and Canaan falls, what happens?

And what happens before the End of the World in the Book of Revelation, when Babylon falls?

But the reason the pattern is not obvious is that we have been trained to look at the Bible and even the Book of Revelation in one naively simplistic way — as the dot at the end of a book. But think of the Bible, and especially Bible prophecy as a fractal. Yes, prophetic events reach a crescendo, a culmination, however, the end is embedded within self-similar patterns of various lengths, all interconnected over time of infinite number. In other words, time is a fractal.

In mathematics, a fractal is a detailed, recursive, and infinitely self-similar mathematical set.

This is the true perspective of Bible Prophecy. And this upcoming crescendo in or age will work its way into something even more grandeur in the next age.

Fortunately, God has made all this simple by allowing the Biblical patterns that weave as a fractal to also be the math that produces a literal fractal, so as to form an image that we can literally see. An image of space and time. Not just space and not just time, but space-time. Location and time are synonymous.

What is it an image of?

It’s an image of the Glory of Jesus, which is what every letter, word, and page in your Bible has also literally painted. One image. One Person. And we in Him. And like a fractal, all that is not in Him will vanish.

However, 3.5 days later the two rise and ascend to heaven, (Rev 11). And then The End comes at the Last (seventh) Trumpet — but that, too, is a fractal, and thus from the Seventh Trumpet emerges seven more things, and seven more from that — its a fractal!

Back to our discussion about time as a fractal…

The imagery of the Bible is a fractal

And just to stretch you some more! Plus a leap day according to modern reckoning equals 2556 days, which as year brings us to October of 2018.

And we wonder why the past 490 days have had more natural disasters than in all the history of America!

Like Haman, America has already begun to fall, unless she repents. Already Mordecai is remembered before the king, (Book of Esther).

“For her sins have reached up to heaven”, and the cities of California are the sewer pipes, like two false prophets with frogs coming out of their mouths. Think Fractal! In the Bible, a city is often personified, such as “Sodom and Egypt”, (Rev. 11).

In mathematics, a fractal is a detailed, recursive, and infinitely self-similar mathematical set.

Thus, generally speaking, from Canaan (End of the World) to now is 7*490 years.

Do you see how one pattern weaves into another?

And this sort of thing is endless because all things are interconnected. It’s just that this is the pattern God has made visible at this time and is the primary modus operandi for this season of time. It’s what takes front stage at this time in an ongoing drama.

Let us begin again with the chart put out a year ago (in the Autumn of 2017). Its the blueprint of what will happen over the next 14 years.

2025 is 70*7*7 years from when Israel entered the Promised Land. In other words, as implied in the chart, there are 490 days to Hurricane Michael and the California Fires, (esp. Paradise Fire and the 1.5 days that it spread), and also 2300 days from these same two events to the said New Year in 2025, as per the chart put out last year ‘as a pattern of what will be’, as said.

“Within only a day and a half of it starting, the Camp Fire destroyed more properties than any other fire in California before it.” (The BBC, “California wildfires: The day Paradise burned down”.)

(Note: The 360 calendar has a 30-day leap month that causes the 30-day spread between Hurricane Michael and Paradise Fire. Both names have obvious symbolism in regards to the book of Enoch and Daniel 9-12. Micahel is the archangel and Paradise is another word for Eden and Heaven.

The above was a direct quote attached to this same original image back a year ago. It refers to the fact that this fire (worst ever at the time) began the exact hour that marks Moses’ death as per the above chart that I said at the time was what God was causing these events to occur in conjunction with. In other words, this fire began exactly 180 days after the anniversary of Aarons death, and so forth. Besides the video on Youtube, you can verify this on the Wayback Internet Archive if you think that I am making all this up as I go!

Mere “chance” on place names, or a way of getting our attention?

“And there was war in Heaven (Paradise). Michael and his ANGELS fought against the dragon and his angels…” Rev 12:7.

This is what the Sovereign Lord says: I am about to set fire to you, and it will consume all your trees, both green and dry. The blazing flame will not be quenched, and every face from south to north will be scorched by it. Everyone will see that I the Lord have kindled it; it will not be quenched.’”

Then I said, “Sovereign Lord, they are saying of me, ‘Isn’t he just telling parables?’” (Click here for more about this verse, and the shooting at Thousand Oaks hours before the fire started.)

Typhoon Yutu was 7*72 days later, also significant. A day is as a year, and with the Precession of Equinox, 72 years is as one day. Thus, 7*72 is in this sense as one week. Typhoon Yutu is also, therefore, 2300 days to Passover of 2025 on 360-calendar. “In the mouth of two or three witnesses let everything be established.”

Moreover, if you check on the 360-calendar again, notice that Typhoon Yutu occurred on the 9th month, the 24th (and 25th) day, that is, Hanukkah on the 360-calendar, the festival that originally fulfilled the 2300 days of Daniel 8. (And see Haggai 2:20-23, the verse and date that the Lord brought to my mind to study a few days before Typhoon Yutu).

And Paradise Fire occurred on the tenth month the 9th or 10th day, which is the anniversary of the beginning of the seige of Jerusalem. (See the signs to do with Ezekiel’s symbolic siege of Jerusalem as discussed a few days ago.)

But what is negative and positive?

Yin and Yang are unbiblical. Discipline from God is good.

(Enoch’s calendar was held in reserve for the last day but does not replace the Jewish lunar calendar. It’s a second witness that “God has power over these things”, Rev. 16:9. The 360 calendar is an aspect of the 364-day year.)

(See update at the end. The Fire was 100% contained after 490 days too, except on regular Jewish calendar!)

Here are the key points:

Update and Conclusion to Fires

“The firefight got a boost last week from the first significant winter storm to hit California. It dropped an estimated 7 inches of rain over the burn area over a three-day period without causing significant mudslides.” (Weather .com) 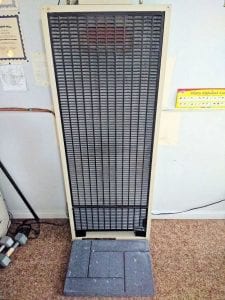 The next day (Nov. 26th), the fan on my furnace that I mentioned became so increasingly noisy and annoying over the past week that I finally turned it off completely, despite the sign of the slab/brick, (or as I thought). The slab had been their 25-and-a-half days when I pulled the plug. The furnace had worked fine ever since we got it over 10 years ago, and so the timing of the fans demise seemed peculiar given the fact that it worked fine a couple of weeks earlier when I purchased the brick for that very purpose.

“Last year, Wednesday, Sept. 20, 2017, Hurricane Maria (one of the most deadly, destructive and powerful to have ever made landfall over US territory) crossed Purto Richo on Rosh Hashanah. (Amazingly, that day the Enoch AND the Jewish lunar New Year overlapped. It was the New Year on both! Sun and Moon — Two Witnesses!)” 1260d.com/2018/11/14/hurricane-michael-and-typhoon-yutu/

One thought on “490 days to Hurricane Michael & Paradise Fire”