The following is for those who desire more information.
In this second part, we answer questions that may have arisen from the first part, along with deeper insights.

The last seven years of Daniel’s 490

The prophecy of Daniel 9 presents the last seven years in the grand 490-year cycle as pivotal.

Subtract seven years from 2024t and you get 2017t. This makes 2017t the start of the 490th Shmita. (Technically, 2017t begins the 489th or 490th Shmita year because the land on the east side of the Jordan rested from war seven years prior, {Deut. 3:20; Josh 11:23}. But this does not affect the actual Shmita year or Jubilee cycles, only the possibility of one additional missed Shmita for several tribes of Israel.)

Both the lunar and solar eclipses occur on a Shmita

The year 2014t was the total Lunar Shmita Eclipse, about which I devoted a full year of research and wrote extensively. It was part of a unique tetrad, that is, four total lunar eclipses, each half-a-year apart, each landing on Passover or Tabernacles in both 2014 and 2015 – and is very rare.

Thus, God marked the 2014t Shmita with the lunar eclipse. But because the original Shmita begins from Creation itself (4115t), and it is in alignment with the Conquest (1406), the 70-year exile that includes the 49 years from the fall of Jerusalem to the return (587-538), it is therefore the dominate cycle. As the dominate Shmita, God has marked 2017 by this total Solar eclipse.

Note the divine order: although the sun (solar) dominates the moon (lunar), yet the night precedes the day. So it is with the function and timing of the eclipses.

And it is the pattern of Creation itself: God created everything in six days; three days of forming in parallel to the next three days of filling, (Gen 1). Thus, light was created on the first day, but the sun and moon three days later. (Deut 14:28 is based upon this pattern. Also see Dan 9:27, “the middle of the week”.)
Moreover, Jesus rose the third day. He is the Light before Sunlight. His seven-year ministry cut short in the middle. When Jesus hung on the cross, the Sun shone three hours, then Light abnormally darkened three hours – “A darkness that could be felt,” (Ex 10:21-23). But in three days the Sun rose, preceded by the Morningstar, (Matt 27:45; 28:1; Rev 22:16). Ponder this to understand what eclipses mean.

We will not go into detail in this blog, but both Shmitas (2014 and 2017) ultimately have their origin in Creation. See below charts if you wish to know how that works. It’s important if one wants to understand how God calculates jubilees and missed jubilees – to be explained later. 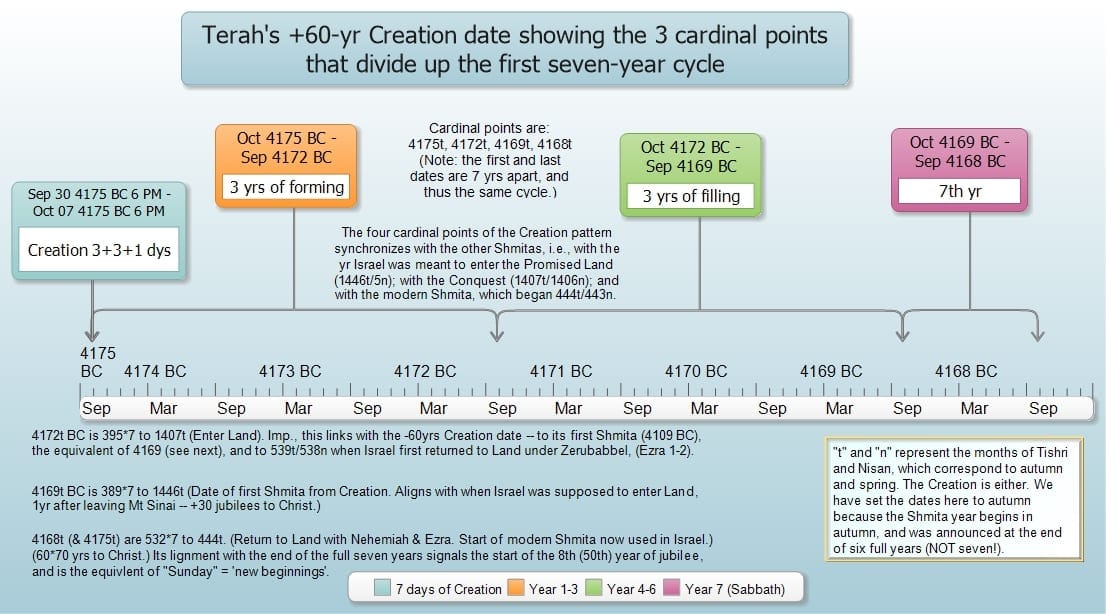 Moreover, when counting jubilees from Creation, be sure to add one full year because the Shmita and Jubilee are announced at the end of six full years, not seven. That’s why Adam died at 930 –the 19th jubilee of his life.

When does the Jubilee begin?

Jewish scholars (and the Talmud) insist that the jubilee cannot restart until all 12 tribes return to the Land. So, when we speak of the jubilee, we refer to the original one that began 1406 BC. As it is written…

As we will show, although men no longer keep the jubilee (and collectively, Israel never kept it anyway), yet God still tracks it!
Why does God track it?

Because it symbolizes and proclaims the First and Second Comings of Jesus Christ. “HE IS OUR SABBATH REST”! (Hebrews 3-4).

Important side note for the advanced student: the modern Jewish year from Creation (3761t BC), which is based upon faulty chronology, is nevertheless perfectly aligned. Not long after Christ, in an attempt to appropriate known facts, yet force the terminus ad quem of Dan 9 to be AD 70 (68), someone determined the Conquest as c.1273 BC, and eventually the date stuck.
But the effect was providential!

On the other hand, (to agree with Ezek 40:1) they invented a 14-year delay from the Conquest until when, allegedly, the jubilees officially began. This meant that according to their reckoning the first jubilee began in 1259 BC. However, the effect of this was to shift the jubilee three cycles ahead of the correct date of 1406 BC!

In other words, according to Jewish reckoning, (which is the very datum used in Israel today), 2024t-2025t is the 67th jubilee (had they never gone into exile), but really it is the 70th. Either way, it’s the same jubilee cycle.

As most bible-students know, a jubilee does not occur in 50-year cycles, but 49-year cycles. The “50th year”, is counted either inclusive or exclusive of the 49th year. (Scholars are divided on the issue.) But either inclusive or exclusive, the consensus view is that the seven-year Shmita cycle remains in synchronization with the 49-year jubilee cycle.

1406 BC is the consensus date of modern evangelical scholarship, and confirmed by Talmudic tradition in regard to jubilees, (e.g., Ezekiel’s vision in 574t, or 573n, said to be on the ‘17th jubilee’). It is the date most frequently found in bibles, books, and scholarly articles. Exceptions to this are typically due to the failure to account for overlapping reigns in the chronology of the kings of Judah. The overlap of certain father-and-son kings of Judah is apparent when compared to the kings of Israel. (Or it is the failure to take 1Kgs 6:1 literally.)

Do you believe in coincidences?

If you add up the overlapped years of the Kings of Judah, they amount to exactly 49 years and 10 days (or 50 years and 10 days, depending on whether one takes the fall of Jerusalem to be 586 or 587 BC). This is exactly the number of years in a jubilee –to the very day. It also takes in both the “inclusive” and “exclusive” spans of a jubilee, (Tishri 1 to Tishri 10th, plus the 49, or 50 years).

So then, amazingly, one can even ignore modern evangelical scholarship and the Jewish Talmud and still agree that 2024t is the year of Jubilee!

In conclusion, to the traditionalist Jew 2024t is the 67th jubilee.
To the old-school Christian chronologist, it’s the 71st.
But to the vast majority –and the actual one –it’s the 70th.
My friend, that’s a very large swath of agreement!

The eclipse is in America, what about the rest of the world?
I’m a Canadian. I am fully aware that America does not represent the whole world. But America has been a light to the world. If its light goes out – watch out!

These first two blogs have served to introduce our main subject:
“How did God calculate the missed Sabbath years?”

(It’s truly wonderful… To be explained in the next few articles!)

Click here for “Part One” of this two-part article.