This post assumes that the previous two posts were read. This is written as briefly as possible. You may have to use the supplied links for more information.

They say “a picture is worth a thousand words”.

Like numbers, pictures are also a language. Both communicate information.

There were quite a few posts from the past written prophetically about Russia. But since our theme here is the Bear of Russia, we will focus on this particular post, written almost exactly three years ago.

Below are excerpts from the 2019 article!

“Belushya Guba is the main permanent settlement of the island territory of Novaya Zemlya. A large proportion of its population is made up of military personnel associated with the nuclear test sites located on the island.” Wiki

Rod with Flag points to Russia

Both the Russian and the US-led conferences are to be held on Valentines’ Day. This reminds me of something personal.

“Beware of Valentines’ Day!” Those are the words that the Lord kept speaking to me 31 years ago when the devil attempted to destroy my family, including my mother and friends. It was our personal “Purim”. (See the Book of Esther. Purim and Valentine’s day both commemorate love and someone’s execution, and both occur around the same time of the year.) 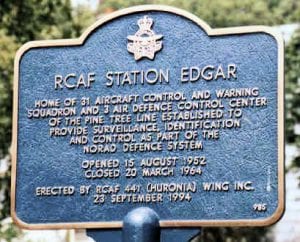 But like Purim, God turned the tables. When that day came, what was meant to be the final blow to kill us instead became the turning point. It marked the day when the darkness began to lift.

After many months of descent, that very day, Valentine’s Day,  marked the slow ascent from the pit.

A Norad base was in the small town where I now live. We moved in on Hanukah, 2003.

“When we began our move, the moving company building where we rented the moving truck blew up like an atomic bomb… 1290 days after the Hand code.” (bible-codes.org/Atomic-bomb-nuclear-explosion-code-b.htm)

The two opposing sides meet separately, but both on Valentine’s Day!

It is interesting that this meeting for peace occurs just ten days after the Pope’s religious equivalent. After all, a woman rides the beast, (Rev. 17:7).

The two-day conference includes representatives from some “60 countries”. The stated theme was “Promoting a Future of Peace and Security in the Middle East.” The Bible says:

While people are saying, “Peace and security,” destruction will come upon them suddenly, like labor pains on a pregnant woman, and they will not escape. (1Thess. 5:3)

Russia, Iran, Turkey to hold fourth round of Syria talks in Sochi. Trilateral summit between ‘guarantor countries’ to focus on long-term settlement of the Syrian crisis, the Kremlin says.

The Syria talks run in parallel to the Geneva talks organised by the United Nations.

But the three leaders will also discuss projects and coordination on the international arena. (Aljazeera)

Jehovah goes to war against her (i.e., ‘Babylon‘),
and the arrogant one!

Jehovah goes to war against her,
and the one being removed!” (Bible-codes.org)

Purim is the celebration of the Jews over the attempt of her enemies to destroy them in the days of their exile in Persia, as recorded in the book of Esther.

It happens that Feb. 11th (the 40th anniversary of their revolution) on the 360 calendar is Purim. “Purim” is another word directly related to the Aramaic word “Uparsin“.

Russia invaded Ukraine on February 24th, 2022. And the leader of Ukraine is a Jew like Mordecai!

Now consider the decree of that wicked Haman in the book of Esther, (and as mentioned in the post about the Russian “50 Bears“!)

Then on the thirteenth day of the first month the royal secretaries were summoned. They wrote out in the script of each province and in the language of each people all Haman’s orders to the king’s satraps, the governors of the various provinces and the nobles of the various peoples. These were written in the name of King Xerxes himself and sealed with his own ring.

Dispatches were sent by couriers to all the king’s provinces with the order to destroy, kill and annihilate all the Jews—young and old, women and children—on a single day, the thirteenth day of the twelfth month, the month of Adar, and to plunder their goods.

This leads us to the Prophetic Map constantly referred to three years ago.

As repeatedly said, the future is written pictorially on the map. The stars in their constellations represent the heavenly war that is occurring in the spiritual realm and are overlayed upon the map of the earth like clouds.

All these things were revealed systematically, line upon line, over the course of several months three years ago.

Constellations of The Bear and Orion, “The Mighty Hunter before the Lord”, Gen 10:8–12

“Can you tie up the chains of the Pleiades,

Or untie the cords of Orion?

“Can you bring out a constellation in its season,

And guide the Bear with her satellites?

First is shown the constellations without the Prophetic Map.

Notice the Golden Bull of the Stock Market is on the right balance. The below image has the earth overlapping the Bull Market as it spins on its axis. The Stock Market has been falling all 2022. Will it recover soon? God knows.

Now the heavenly beings at war are overlaid like clouds upon a map of the earth. This is the Prophetic Map!

First is the earlier rough map that included the outer constellations, and then the final Map.

Now locate Moscow and east Ukraine (which was annexed by Putin at the start of the war) on the Prophetic Map. They are located in the right hand (Moscow) and lower right hand (East Ukraine) of Orion the Hunter. Orion has a club in his hand that threatens the whole Middle East, but his eye is on Israel as its final objective.

The face of Orion is situated so that he looks to the east (as seen in the constellation image). But when overlayed upon the Map, the sea forms an eye and an angry face that appears to look at Israel, instead.

Iran and Iraq are located at the armpit of Orion.

Let’s look at that again and enlarge Orion.

Now recall the hand in the Hand Code discussed three years ago in that post (as quoted earlier). This code is literally written on the extended hand, from Daniel 5, “The Writing on the Wall”. It foretells the doom of many Orions/Mighty Ones/Nimrods. 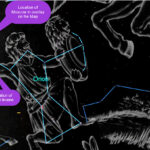 He is the King of kings and Lord of Lords. He will subdue the king of the north and send him back to where he came from.

The angel of the Lord stands above the river (Eridanus) with two hands raised and on oath and promises that everything is timed, that is, “for a time, times, and half a time!” Daniel 12

Jehovah goes to war against her (i.e., ‘Babylon‘),
and the arrogant one!

Jehovah goes to war against her,
and the one being removed!” (Bible-codes.org)