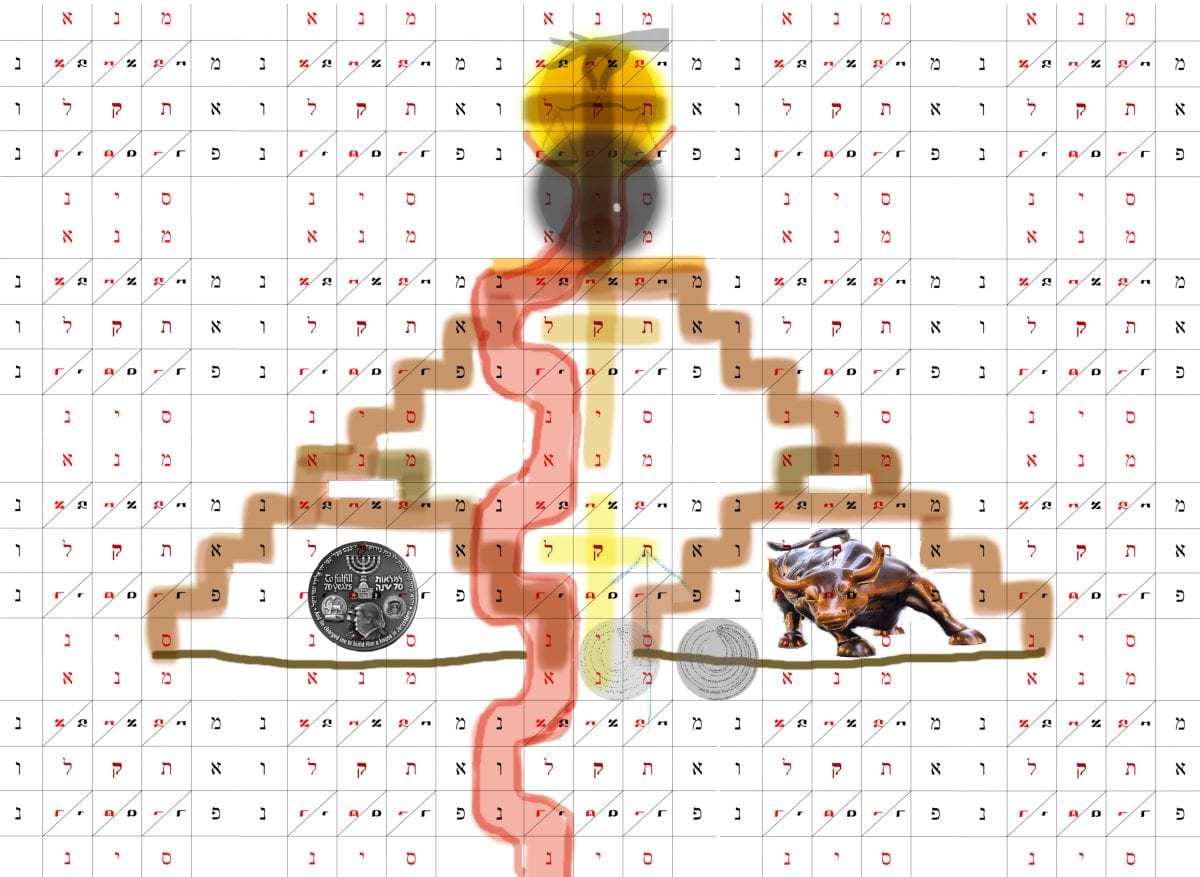 About the above image: in the balance, the light-weight Trump coin goes up and the Bull-Market sinks down.

The Dow Jones Industrial Average made its official entrance into a bear market on Wednesday after the World Health Organization declared the novel coronavirus a global pandemic and aggravated investor anxiety that the disease would undermine economic growth. (CNBC)

Other posts have been written about the Stock Market already, but today, as WHO declared the coronavirus a pandemic, the Dow and Toronto Stock Exchange officially entered a Bear Market. Today ends the longest Bull Market in history. (Note: I was born in Toronto and now live north of there.)

The prophetic image displayed in about 40 posts the past year predicted that this would happen.

The very first post that presented the prophetic image was on Dec 6th, 2018, and reposted again and again after that.

This is “Part One” of Four parts

The gods are judged!

The Lord began to open my mind to understand the writing on the wall back in early 2000 (Feb. 4) around the start of the collapse of the Stock Market that culminated in the fall of the World Trade Towers. (See bible-codes.org/bible-prophecy-encoded-mene-babylon-Saddam.htm )

The encoded message predicted (among other things) the events that led to the Gulf war and the exact day of the death of the ‘king’ of Babylon (Iraq), that is,  Saddam Hussein and sons, which was 3.5 and 7 years from the day that it was reinterpreted.

But now, this time, once again, 19 years later, these four simple words “Mene, Mene, Tekel Uparsin” are further opened up to reveal the message that the gods of Sumer/Babylon would have detected, and the details of the spread of the mystery of iniquity from Babel to now.

This second reinterpretation began Nov. 23, 2018. This day was also Kislev 15th, the anniversary of the “Abomination that causes desolation” on Kislev 15th, which was  6*364 years ago to the very day, in 167 BC.

As explained many times, this image (and the other like it), depict “Mystery Babylon”. The Hebrew letters in the background of the image repeat the words written on the palace wall of Babylon in 539 BC — over and over again, “Mene, Mene, Tekel, Upharsin”.

As said so many times, these four words are in fact four coins, and the secret message within those four cryptic words contains numerous play on words to do with money. “Mystery Babylon”, “buying and selling,” and “666”.

Take a look at the first image. It became the background image within most of the subsequent prophetic images that the Lord revealed.

Notice the hand appearing, writing on the wall that weighs the sun, moon, and Babylon on its scales.

Note the enormous scales towards the bottom, with the half-shekel with Trump’s image — weighed against the Bull Market. (This Bull is the statue on Wall Street.)

As also explained many times, these Hebrew letters repeat the name, “China.” As said, they also refer to ‘the Bull Market of China.’ (The Hebrew word for China is, “Sin,” which is found encoded within the word, “Uphar-sin“. The code has much to say about China and its atheism, but in this context, about its economy.)

Thus, the Stock Market sinks in the scales, and the Bull becomes a Bear Market because of the contagion that spread from China. Trump is helpless against its weight — as predicted by the prophetic image. Trump Himself, and His presidency, is also being weighed in the balance.

Indeed, the whole world is being weighed in the balance and found wanting!

This second reinterpretation began Nov. 23, 2018. This day was also Kislev 15th, the anniversary of the “Abomination that causes desolation” on Kislev 15th, which was  6*364 years ago to the very day, in 167 BC.

Another day that has a similar meaning to that of Kislev 15th is Purim. The Purim was cast on Kislev 13th, as said in yesterday’s post. The feast of Purim lasts two days, Kislev 14th and 15th. Today is Kislev 15th.

And as said many times when explaining the code, the moon-god named “Sin” is especially judged.

It happens that both Kislev 15th and Adar 15th occur on full moons and are exactly 4 x 4 months apart. (In the Mene Tekel code, the square of 16 is important in regards to the four corners of Mystery Babylon. “16” moons, therefore, represents all Babylon — the entire world.)

Below is a list of the signs that occurred after the Lord revealed these things a year ago. This list, with the images, is repeated in every post. Note the importance of China in these posts, including what it says in the caption within the lower-left image.

As discussed in earlier posts — a few days before the drop began — Shebat 24th is the date on the Jewish calendar that represents the “Times of the Gentiles”. (Feb 19/20th to March 11th/12th.)

I discuss the delay number of “21” (and “210”) in combination with the date of “Shebat 24th” in the series of posts about the “Vision of the Lamb“. Below is a list of posts at that time. Note that most dates are just before Feb. 20th, when the free-fall of the Stock Market began.

The most important of these were the signs in the heavens that preceded the collapse by only one day, where I discuss at length the importance of Shebat 24th, and America and the world weighed in the balance. See, Rise and fall of the Dung god. February 18, 2020.

What is God saying?

The nations are weighed in His balance and found wanting.

Woe to the puny man or so-called god that opposes Him!