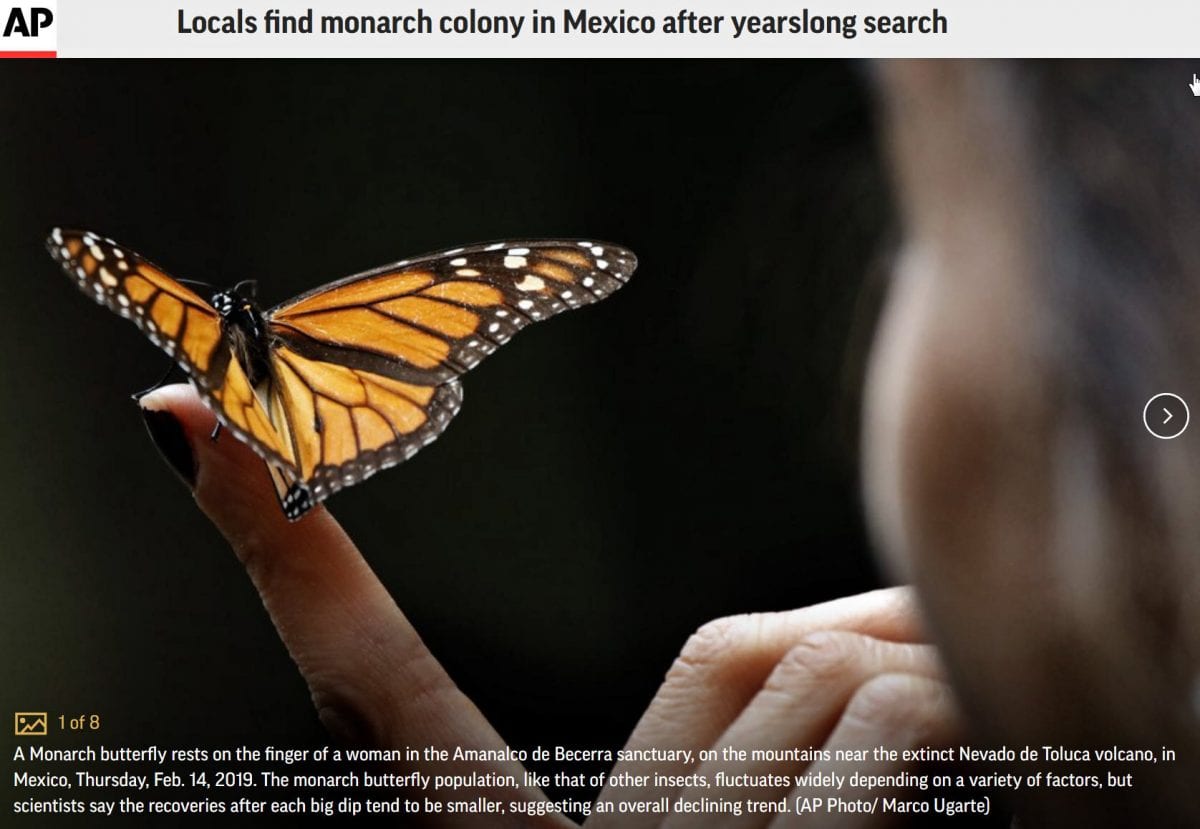 Jesus said, “I am the resurrection and the life”

This last sign is the most beautiful. It symbolizes the rapture and resurrection of the saints.

The first sign was about the authority of the saints over the dragon, and this 12th sign has the same meaning, but much more.

This 12th sign in contrast to the previous sign that was largely about the Harlot Church who rides the beast. She is the bride of Satan, who sits on seven mountains. (The seven mountains are  seven ages of religious apostasy, that stretch from Sumer {Babylon} to Islam.)

Pope Francis is seen here with a large image of a false Christ above him as he speaks to a large audience of different religions, Feb 4, 2019. This same day he signed a declaration of peace with the Grand Imam. Recall this quote from the previous “11th sign“:

A woman rides the beast

“There I saw a woman sitting on a scarlet beast that was covered with blasphemous names and had seven heads and ten horns.” (Rev 17:3)

And now we find that the butterfly images were also taken on Valentine’s day, that is, Feb. 14, 2019.

Set me as a seal upon thine heart… and arm

“Set me as a seal over your heart,

as a seal upon your arm.

For love is as strong as death,

its jealousy (קָנָא)as unrelenting as Sheol.

Its sparks are fiery flames,

the fiercest blaze of all.

rivers cannot sweep it away.

If a man were to give all the riches of his house for love,

What is greater? The demonstration of the jealous wrath of God, or the whisper of His love?

Is it mountains that fall into the sea that bring floods or the stirring of monarch butterflies from their nest? The drums of war or “the still small voice of the Lord”?

In a moment, in the twinkling of an eye, at the last trump: for the trumpet shall sound, and the dead shall be raised incorruptible, and we shall be changed.

The seventh encoded seal was a butterfly

A complex prophetic image from 16 years ago

On the Day of Atonement 16 years ago (Sept 16, 2002) the Lord began to reveal a series of prophetic images. A butterfly (or moth) overlapped the three coins of the Mene Tekel Code (i.e., the writing on the wall).

Also, this butterfly, in turn, draped the tabernacle of Moses and even the very mountain itself. (Moses was shown the covering of the Tabernacle at Mt Sinai.)

Moreover, the butterfly clothed and draped a tree, shaped like a menorah/lamp and Christ hung naked on that burning-cross (shaped like a menorah-serpent) as a sacrifice. He did so because of “His great love” for His bride so that she might be clothed with His righteousness.

Moreover, that butterfly was depicted as the seal upon a cylinder or a signet ring, the seventh seal, to be precise.

All of these things are present in some way in the 12th sign of the butterflies upon the mountain.

Moreover, the butterfly also overlapped an image of a burning bush on the mountain located one Babylonian “Sar”, below, (i.e., 3600 letters/years/days)?

And the rod upon which the butterfly sat has an encoded message that in part read:

“Grace stirred! God will do a miracle sufficient for them to believe?”

As I said in the simple monarch-butterfly video a year ago, the monarch butterfly symbolizes the humble version of ‘the women given two wings of a great eagle’, as illustrated in the prophetic fractal image below.

To Russia with love

God released this 12th sign to the general public by almost all major news outlets, beginning with Associated Press, revealing images of the discovery on Valentine’s day. This is the same day as the 11th sign when ‘world leaders take sides for war’, including Russia.

You may wonder what the three circles/coins on the rod juxtaposition to the butterfly/moth read.

The following is an exact quote, nothing added, including the small purple bracketed information.

“A riddle! Shiloh will rule! He will repay Rosh (i.e., ‘the poor One,’ or ‘Russia’, as suggested by the codes location to the Dragon Bible Code) according to the bitterness of the Law!

She conceived at the desolate mountain (the mountain of regret). He circumcised their Prince there for her sake, and for the sake of the Name.”

The ‘Butterfly on mountain’ code

As said, a couple of dozen articles were written 16 years ago detailing these images and were dated. It was explained back then that each letter represented a day and year, consecutively. It was explained that the main image of the moth overlapped the mountain at 490*3 letters/years. This suggests the connection to the year AD 2025, which is 7*490 years from when Israel entered the Promised Land in 1406 BC. (That is, the spring New Year on the 360-calendar. This can be independently verified on archive.org.)

Amazingly, the main image that AP used in its article says it all if you look and read carefully.

or example, in the below image, note that the butterfly is on her finger (like a butterfly-signet ring!).

Note that the butterfly is on a female finger, symbolic of His bride.

Note that its Valentines day.

Note that it’s on an ex-volcanic mountain (“a fiery mountain”).

And as said, the butterfly is in juxtaposition to the three coins of the Mene Tekel Code (at left)  which therefore connects it to the main prophetic mountain image that we have been discussing in this series about “Mene Tekel: The gods are judged.” And the main image of this mountain was posted the same day as the discovery of the butterfly nest. 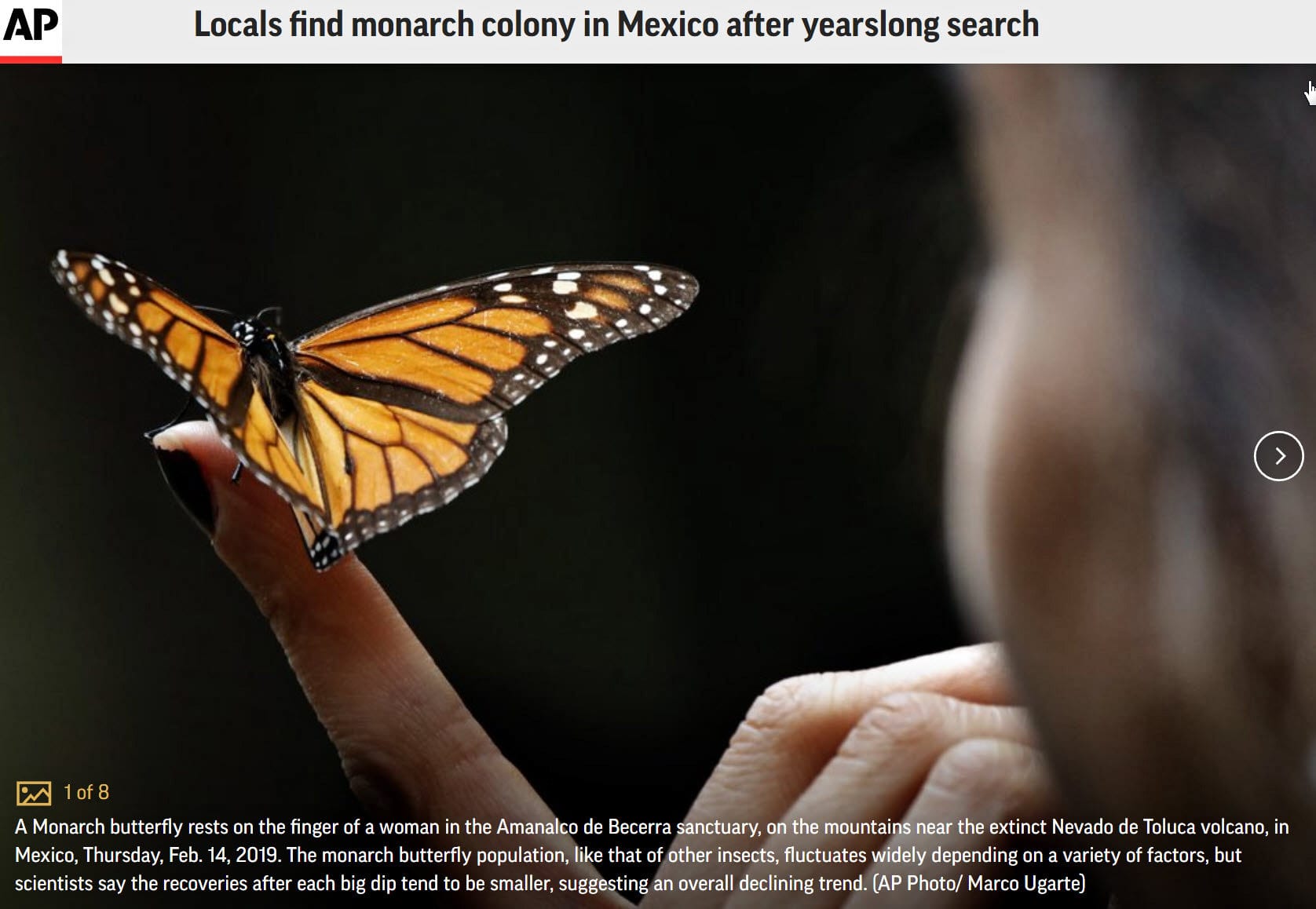 The mountain where the butterflies are located has a legend attached to it about the ancient ‘gods’ and a story very similar to the Bible’s Cain and Abel story.

The legend is worth quoting (as translated from Spanish.)

According to the legend about the brothers: two brothers disputed power, one through war and the other through religion. The eldest was the one who started fights and wars, while the youngest tried to calm his brother with religion.

The gods tired of wars and human offerings of the elder brother, decided to calm him down, but without knowing it, the younger brother interposed himself between the gods and his brother, and the gods killed the younger brother, to remember him, the gods buried in the middle of the forest and the mountain of Jocotitlán called Mount Xocotépetl was formed.

The older brother, believing in power and forgetting his brother, got up and started tyrannies, but the gods, made him go to the center of the valley and undressed him, opened his chest, and left him to die little by little. The man touched his chest and felt his heart, but it was beginning to burn and the volcano began to be created. Regretful, he apologized to the gods and told them that he would die better and share the kingdom with his dead brother, the gods covered his heart and the volcano died.”

There are many more parallels of the picture codes with the discovery of the butterflies atop the mountain, including the location of the mountain. Even the exact day when this 12th sign would occur was encoded in the image itself. For details, please click “Read more” to continue!

First, a brief explanation about these images so that what I say afterward will make sense.

Many years ago the Lord revealed these and other images encoded into the Bible.

They all came true.

However, this one especially has relevance to now because the three circles below the butterfly represent the three coins of the Mene Tekel Parsin Bible Code, and it predicted the day (Nov 23, 2018) when the Lord would give to his people this second wave of understanding into the writing on the wall.

The encoded rod is 1260 + 1260 letters long and depicts a rod with a butterfly and three coins on it. The rod is measuring the cloth that drapes the above tabernacle. The first half of the rod (where the butterfly is) is the Lord’s temple. The mirrored opposite is Babylon’s counterfeit (where the three coins are). The code opens up into the temple dimensions for the tabernacles of Moses in the wilderness — doubled. (See above image.)

As said before, this code also predicted what is happening now. In particular, the three coins/circles (dated “2195 BC”) that represent the Mene Tekel Code first discovered Feb 4, 2000, but again reinterpreted Nov 23, 2018. The Mene Tekel code is in juxtaposition to the Moth/Butterfly code.

You can read the articles back 15 years ago for the details, but here we keep it simple.

In the below image, to the left of the three coins/circles of the Mene Tekel Code is the Lord, naked upon a cross. And to the furthest left is the Mountain ablaze. You can read about each at my former site www.bible-codes.org.

This is a quotation from this article of about 15 years ago:

The word for “my moth” in the bible code, likely can also mean, “my butterfly”. (“‘aes”: “A masculine noun indicating a moth. It refers to a rather fragile but destructive four-winged insect.” {The Complete Word Study Dictionary.} Same word is used in Hosea 5:12, “And I will be like a moth to Ephraim: and like rottenness to the house of Judah.”

(Rod reads:) “They will measure the great compassion within my moth!
The blood of salvation (Jesus) is in the water! Grace stirred!
Suddenly the hand of God worked a wonder sufficient for them/him (to believe)!”

Just a few days before Christmas though, a handful of communal landowners were on a routine patrol of their forest when they discovered the monarchs on a steep mountainside bisected by a dirt track far from the volcano’s iconic crater. The butterflies were hidden in plain sight.

In towering firs, they hung in massive clumps on sagging boughs, their brilliant orange and black colors concealed by the pale underside of their closed wings. (Fox News)

This mountain in Mexico is called Nevado de Toluca, and means, “The Naked Lord”.

The nest for the butterflies was discovered the same day as the 2nd sign when Mount Anak Krakatoa erupted, Dec 22, 2018. (See calendar of dates at left and also the “11th sign” that explains the matrix/letters overlayed upon it.

Notice what the letters spell where the events at that time landed on, “Anak” and “Their nest” אנק קנמ, or Aramaic, “The nest קנא”, etc.)

Reminds me of resurrection

Below is a quote that speaks to me of the humble state of believers as they await the rapture and/or resurrection.

“On a recent afternoon the air filled with monarchs as the midday sun sliced through the thick forest, leading some of the butterflies to take flight. Others lay on the ground after reaching the end of their life cycle.”

My corny video from over a year ago! 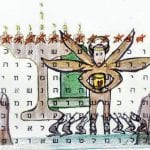