Hurricane Lorenzo means,  “The one who wears a laurel wreath“

ITS STRENGTH AND SIZE: 5 ASTOUNDING FACTS ABOUT LORENZO

In the previous post, I said that God revealed His geometric signature hidden in Pi and that Sept 22 was the new “Pi Day”.  It happens that Sept 22, 2019, is also when Lorenzo began to form.

Then on Wednesday morning, the storm became a hurricane. On that same morning, the Lord showed me the full shape of His signature hidden between the 37th and 61st decimals of Pi (where there ought only to be randomness). At left is that image. It was well known in the ancient (and modern) world, (as I found out afterward).

Laurel wreaths were given to the victors of the ancient Olympic Games of Greece to be placed upon their heads like a crown. Based upon the sign of Lorenzo, the Lord claims that this wreath — this “the Flower of Life” (as it is called) is to Him a laurel. It is the victor’s crown of life given to Jesus by His Father. He is the author of life itself.

Jesus is the true Star-Gate!

Three-and-a-half days after the storm became a hurricane Lorenzo obliterated the record for the most powerful storm that far east and north in the Atlantic Ocean. It did so as Sept 28th ended. This was most appropriate because the formula of Pi has the circumference of 22 (thus Sept 22 as said that same day), therefore the perimeter of its corresponding square that encloses the circle is 28, hence the 28th, with the last of the four weeks (28 days) divided in half by the said 3.5 days. (See post on Pi for more about Pi itself.)

Jesus finished the circuit around the square!

He has finished the race!

He has sat down at the right hand of His Father in heaven. This hurricane is a memorial of that, as was Hurricane Dorian.

Dorian means “gift” — Jesus is the gift of God to man. This I posted early Sept 1, 2019, in connection with Pi, as Dorian broke records that day for its sheer power; and like Lorenzo, for its northern location when that happened. Therefore, Sept 1, 22, 28 are the start and endpoints of the formula as stated just before these events happened.

Dorian — the gift of God.

Lorenzo — the reward of God.

The two signs are as one.

The below formula comes first. The rest are expressions of virtually the same formula which are added to the first — plus 10^-37.

The following formulas give the bare minimum information to deduce each intersecting pattern. The first four terms produce four interlocking shapes (and perhaps the seventh) and duplicate as if by a prism (i.e., upside down) around the x and y-axis centered at zero. Each shape is based upon the preceding term. The denominator has a separate function than the numerator and must be first interpreted independently then ALSO together.

Every term is progressively on average 10,000 times more accurate to Pi then the previous term, 10^28 in total, (i.e., thereby conforming to the 37th through to the 65th decimals of Pi).

Yesterday (morning of Sept 29, 2019) I finally understood the middle term, which is the most important branch of the Menorah: “1/2 of Pi^3/2”. As it turns out when it is combined with the previous three terms it symbolizes the impossible feat of squaring the circle!

This is impossible to do (see Wiki article for why). Throughout the ages, a host of mathematicians have tried and failed — because it is — impossible.

This middle term does not literally do the impossible, but rather it symbolizes the impossible. Nevertheless, it produces very accurate approximations around the redemptive theme of 70*7, 77, and the 99 and one. It’s main addition to the Flower of Life Laural image that was produced by the previous three terms is that it gives the thickness of the lines that are used in the image. They form a wall around the whole city.

The wall/boundary is composed of a lattice of diamonds, squares, triangles and circles, similar to the outer circles in the below image, except more intricate and considerably thinner.

I will explain all this later, as the Lord permits.

One final note: The numeric of Pi brings out an amazing truth over and over again. From the Father’s perspective, Jesus is the Son who was lost and found, who was dead but is alive forevermore — the Only Son of God who is the substitute for sinners.

When the circle is squared, the lost Son, the rejected stone — He becomes the cornerstone because the Star of David (located within the Flower of Life) has a thin wall 99 squares/circles along each side, with the hundredth at the corner, when the star is multiplied by 70. (This thin wall is the result of squaring the circle, symbolic of the impossible, the redemption of man by His blood, the camel through the eye of the needle.)

22 “But the father said to his servants, ‘Quick! Bring the best robe and put it on him. Put a ring on his finger and sandals on his feet. 23 Bring the fattened calf and kill it. Let’s have a feast and celebrate. 24 For this son of mine was dead and is alive again; he was lost and is found.’ So they began to celebrate. (Luke 15)

To Jesus belongs the victory laurel.

And He will share it with the one who finishes the race.

Be thou faithful unto death, and I will give thee a crown of life. (Rev 2:10b)

Blessed is the one who perseveres under trial because, having stood the test, that person will receive the crown of life that the Lord has promised to those who love him. (James 1:12)

God always does things by the mouth of two or three witnesses. This is now the second sign in two months directed towards those labeled as “New Age”. These are two pillars in the New Age system of belief that relegate Christ to just another belief system.

God loves you very much, my New-Age friend, and this is proof of that.

The first sign was the Buddabrot down by the Christobrot.

The second is the “Flower of Life”, the fulcrum of New Age science. 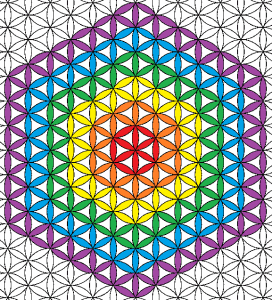 I never heard of either of these until after the Lord revealed them, and in what manner they pertain to Jesus!

He is the Star-Gate!

Neither is there salvation in any other: for there is none other name under heaven given among men, whereby we must be saved. Acts 4:12

Turn around and tell Him your sorry and want to follow him. Believe in Jesus, the One and Only Son of God, who died for your sins. He will save you. He is the door to New Jerusalem.