A couple of people emailed me about the recent post: New Jerusalem and the “Ring of Fire” eclipse. (This was an extremely important sign.)

They reported that this ring-eclipse formed two fiery horns rising from the sea. The below image is now circulating social media.

Eclipses run in cycles. One year before this another eclipse of the sun occurred. An article already was written about what the ominous horned-crescent means.

The eclipse one year ago occurred when Mecca was invaded by locust.

Consequently, God is reiterating this sign and all that it meant, namely, “Mystery Babylon is rising”. (Also see, Mystery Mountain is rising beneath the sea (& Taal volcano).)

A fourth sign also occurred. It began the evening of Jan. 5th in Mecca and lasted at least four days. “Black locust” and flying cockroaches descended upon Mecca. Social media has many images and videos of it.

Locust descend upon Mecca when Part Two of Mene Tekel posted,  “Islam is judged”. Part Two posted the 7th of January 2019. (Note post stamp on the address of Part Two.)  And the below video was also posted the same day that I posted my article about Mecca and the MINAret. The video went viral.

In the above image, notice the Menoret in the background, which is patterned after the Tower of Babel as said in the Mene Tekel Code as posted the same day as this video. Moreover, this image was posted on social media 4*4 days after Anak Krakatoa exploded. Both the sign of eruption of Anak during the full moon and the locust upon Mecca during the New Moon point to the 4th Seal and 4th/5th Trumpet of Revelation. 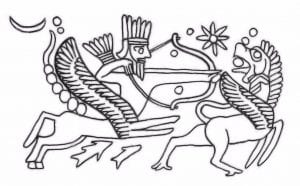 AN UNPRECEDENTED swarm of deadly locusts invaded one of the world’s holiest sites this week as Mecca faced an infestation of “biblical proportions”.

Local resident Abdulwhab Soror, 64, said: “On Saturday night I was praying at the Holy Mosque and the insects were everywhere, the mosque was drawing them in, not only in the yards, but even around the Kabba.

“I’ve been living in Makkah my whole life, I’ve never witnessed something like this before.” Sunday Express

Note: The above man says that it all began late Saturday, the 5th of January, not the 7th as has been reported. The morning of the 7th is just when the Government issued statements to the public as to how they intended to irradicate the problem.

According to this man’s testimony, this would place the very onset of the locust around the time that two-thirds of the sun was also undergoing a partial eclipse facing due south just above the horizon in northern Russia, not too far from Alaska.

During this partial eclipse, the shape of the sun (with two-thirds missing) closely resembled the Mene Tekel image with the sun and moon sitting just above the horizon of the Ziggurat/Minaret. It formed the horns of the sun-facing just above the ground, like two fiery horns rising up from the earth. (See partial moon in the second image down.)

Compare the shape and location of the crescent moon in the above image to the below Moutain-Ziggurat image created Dec. 26, 2018.