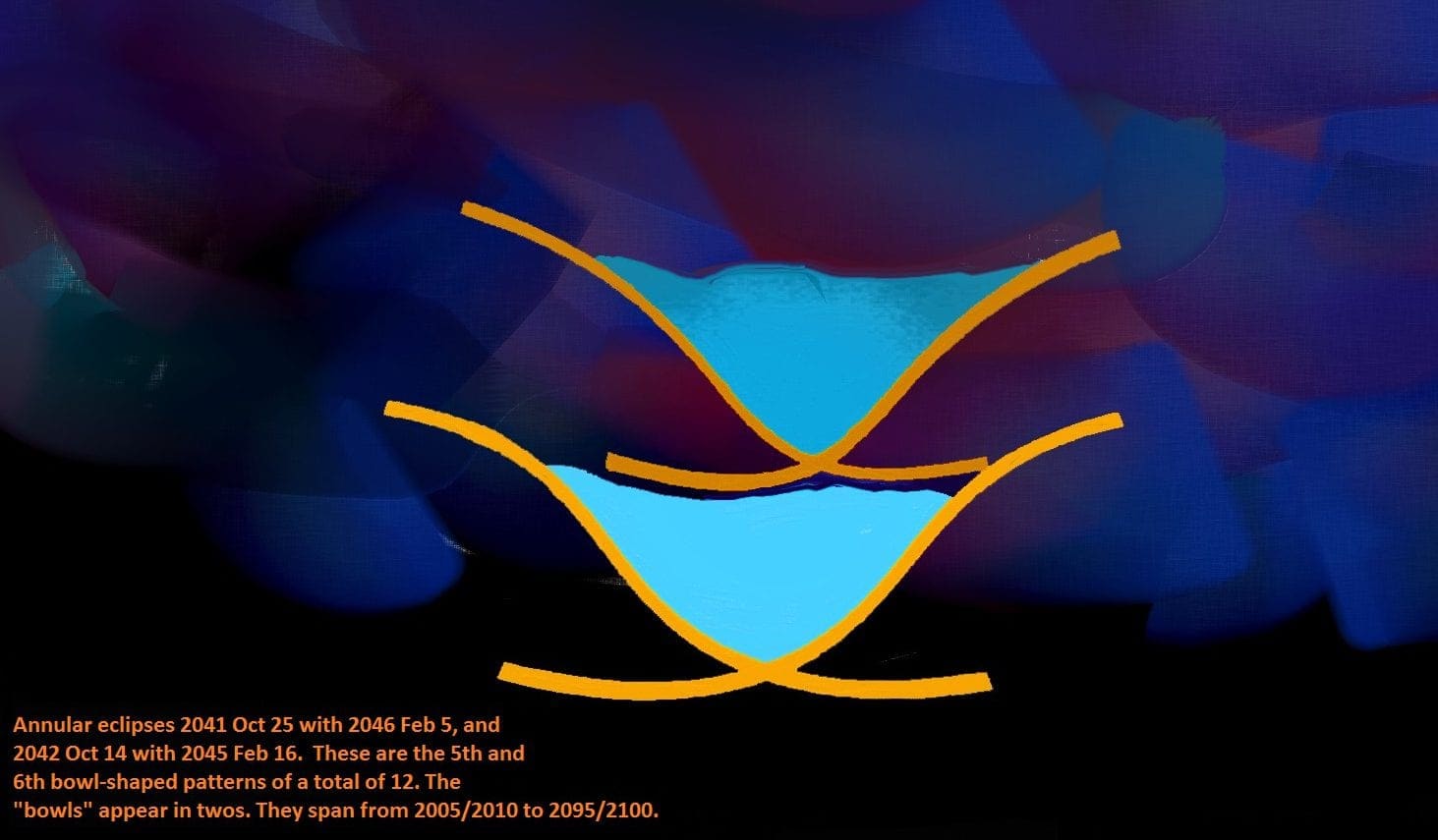 Hurricane Harvey and the 2017 Solar Eclipse

I have friends over to pray for Donald Trump. (Also see, “Storms Bill, Hillary, and Don”, which is discussed at the end of this post.)

Having just written about the August 21st eclipse, I was shocked beyond belief to learn that after 30 years of study into these things, somehow I did not know about the eclipse to occur in seven years — where I live!

I had just written in detail about the August 21st eclipse, and the upcoming “X” over the Red Sea (formed by the path of two future eclipses), and now I learn that in seven years there will be another X over North America a well!

The Lesson: God hides or reveals to whom He wills!

(Unknown to me, Storm Harvey dissipated that evening.)

In the evening I explained the below diagram concerning a series of upcoming eclipses to a small gathering of believers at my sons place.

God has me read my diary from the year 1989 concerning the darkest time of my life. I was a pastor under a leader who led us into totalitarian control. Under the misguided notion that I was doing God a favor I put out of the church my own wife and a newly born child. (It’s a long sad story of how stupid I can be!)

God restored us, and my wife conceived a promised son. During those trials, I had to flee to a farm for about 40 days in Morrisburg, Ontario. After that, I was forced to flee back to Toronto.  In my diary, I recorded that God told me that my trials are a type of the trials that His Body, the Church, will suffer in days to come: A  day of gloom and confusion. Then the Lord opened my mind to see that the path of the eclipse of 2024 overlaps the journey from Morrisburg.

In the evening, I noticed that the eclipses are forming a pattern that repeat themselves over many years. In particular, the below eclipses that span a 35-year period came to my attention. (Keep in mind that these two X’s reappear every 18 years and 11 days — called a “Saros cycle”). This means that the third X in the below diagram is simply the first X (of 2017/2024), but repeated 18 years from now. Nevertheless, notice how it roughly forms a square 12000 stadia (2200 km) around the Land promised to Abraham. It also forms one Aleph (Hebrew letter) and three Tavs (as it was shaped in ancient times). This is the equivalent in Hebrew of the Greek letters “Alpha and Omega”, (Rev 21:6).

All day I ponder the two bowl-shaped patterns produced by four eclipses in 2023 Oct 14 to 2028 Jan 26, and 2024 Oct 2 to 2027 Feb 6. Each are 3.5 eclipse years apart from one other. I have not taken the time to remove the unused eclipses in the below image, but have simply thickened and changed the color of the four Annular eclipses that form the bowls so that you can easily spot them.

These patterns (2 bowls and 2 X’s) repeat themselves every 18 years, (a Saros cycle). The first eclipse that forms the first bowl occurred Rosh Hashana (Oct 3) in 2005, and the last occurs 90 years later. This forms the two sets of bowls straddling one another, repeated six times, (a total of 12 bowls). Before and after this 90 years, the pattern of the twin bowls breaks down.

“Then the angel who talked with me returned and woke me up, like someone awakened from sleep. 2 He asked me, “What do you see?”

I answered, “I see a solid gold lampstand with a bowl at the top and seven lamps on it, with seven channels to the lamps. 3 Also there are two olive trees by it, one on the right of the bowl and the other on its left.” Zechariah 4:1-3

I believe that these 12 bowls symbolize 12 lampstands, (because a bowl of oil sat above each candlestick), which together symbolize the 12 tribes of Israel and the 12 Apostles of the Lamb, (Rev 21). (Why “12+12”? Because there are a total of 24 eclipses.)

Also notice the emphasis on the number seven in the above text. In a similar way, each of the bowls straddles and overlaps the other by 3.5 eclipse years for a total of seven years.

The Twelve Bowls of the Tabernacle

Moreover, the Book of Numbers (ch 7) records that the day when the Tabernacle was first set up, that each of the 12 tribes offered a bowl of flour with oil in it, along with other offerings that were carried by 6 wagons led by two bulls each. In other words, the six wagons each carried a pair of bowls the same as the twin-bowls formed by the eclipses!

The total weight of the silver given as a gift for the Tabernacle at this time (1406 BC, Nisan 1) amounted to 1260*4 shekels by weight, with 126*2 animals sacrificed. Thus we have numbers divisible by 12 and 7 again.

On this day I also pondered the significance of why the first set of bowls were first formed on Rosh Hosanna 2005 and 2006 (October). I recalled how that was when all the mighty hurricanes occurred and afflicted the United States, including Katrina and Wilma.

For those who have followed my writings in the past, I spent seven years predicting when these hurricanes would form (and major tornado outbreaks). And so it was very natural for me to notice the connection of the first bowls to these hurricanes, because bowls in the bible are commonly associated with the outpouring of something, good or bad. I was also aware that there had been a drought of major hurricanes since 2005.

I will show you all 12 bowls coming up, but first lets continue our day-to-day diary of events.

Right after reminding my wife about the meaning of Storms “Don” and “Hillary” six years ago, (I discuss that at the end of this article), I found out in the news that TS Harvey had just astounded the weather people at NOAA (NASA) this morning when the storm mushroomed into a threatening hurricane! Well that got my attention! Indeed, it was headed towards the “Body of Christ”, (Latin, “Corpus Christi”, Texas).

Dark clouds are on the way for the Body of Christ, as the Spirit had been reminding me earlier in the week, just as it was for Him who hung on the cross — and the sun darkened.

I realized a few days ago that one X precedes the pair of bowls to form one complete image, before reoccurring and at times overlapping another. There happens that from the first X formed by the total solar eclipse until the last annular that completes the second bowl (and then all this is repeated six times) are exactly 1260 + 1260 + 1290 days! And so, from the August 21, 2017 eclipse, plus 1260 + 1290 + 1260 days ends the cycle of the twin bowls in 2027 Feb 6, and so forth.

Path of Next Eclipse-Bowl Overlaps Path of Harvey

Now notice the overlap of the path of the first bowl (of this second Saros cycle) coming up in 2023, Oct 14. It’s the exact same path that Hurricane Harvey took after it revived (after exactly 3.5 days) after it passed over the Yucatan Peninsula. (The solar eclipse that just occurred over the US occurred exactly in the middle of this “3.5 days” in which Harvey was dead.  But on the morning of Aug 23, 2017, Harvey revived, (Rev. 11).

In the below image, notice the path of the first stroke of the eclipse that forms the bowl: It passes over the Yucatan Peninsula, then bows-eye over Corpus Christi, Texas. Notice this other “X” formed by this annular eclipse (of the bowl) and the solar eclipse (in blue) set to occur seven years from now. This particular “X” over North America (formed by the annular and total solar eclipses) are only half-a-year apart. And the center of this X occurs over Texas where Hurricane Harvey is going– along its exact path! Harvey means “Blazing Iron”, which reminds me of a ‘blazing iron rod’.

Rev 2:24-28 But unto you I say, and unto the rest in Thyatira, as many as have not this doctrine, and which have not known the depths of Satan, as they speak; I will put upon you none other burden. But that which ye have already hold fast till I come. And he that overcometh, and keepeth my works unto the end, to him will I give power over the nations: And he shall rule them with a rod of iron; as the vessels of a potter shall they be broken to shivers: even as I received of my Father. And I will give him the morning star. He that hath an ear, let him hear what the Spirit saith unto the churches.”

This eclipse of 2024, Nisan 1st, is the eclipse that the Lord told me symbolizes the coming dark days for the Body of Christ,  just as I went through 35 years earlier when I literally fled along the same path as this eclipse. And notice where these two crisscross — right over Texas where the storm is forecast to reverse and turn towards the coast again. It is forecast to meander for a few days, dumping nearly four feet of water in some places. As I type this, the hurricane has just become a category four– exceeding expectations. However, the worst of the storm is on the northeast side, and so Corpus Christi will be spared the worst.

Consider how Harvey’s dies as the sun dies/darkens during the Aug 21 eclipse. And this eclipse is the first in the said series that lasts exactly 1260 + 1260 + 1290 days long. The very next eclipse is this one that traverses the same path as Harvey! The first annular eclipse that forms the bowl that symbolizes the outpouring of something. Think about that!

Compare the upper bowl of the below image with the path of Hurricane Harvey upon leaving the Yucatan Peninsula. The parallel is striking.

“For it is time for judgment to begin with God’s household; and if it begins with us, what will the outcome be for those who do not obey the gospel of God?” 1Peter 4:17

Below are the 12 bowls (6*2). The twin bowls are 18 years and 11 days apart. To view any of these in their original form, please see NASA website.

I have delayed this message since the election to allow Don to be unhindered by negative prophecy.

(below message is moved, and expanded, to the next post!)

The past two named storms to directly make landfall on Texas were Bill and Don. Bill in 2016 and Don (at Corpus Christi) in 2011, at the same time when Hilarious Hillary on the opposite ocean was mocking God, (or at least her stooge, Bill Clinton was).  (See my Hurricane Articles from 2011. Recall the path of Hurricane Irene, meaning false “peace”. Irene occurred in the middle of the two months between Storms Don and Hillary. The 2011 Harvey is in that same article too.)

In a nutshell: God gave American Christians what they asked for.

Church, pray for your leaders, but don’t trust them!

Israel, pray for your leaders, but don’t trust them!

Especially when it comes to Israeli peace talks. This is what Trump’s son-in-law, Kushner, was wrapping up when Harvey revived.

Although not directly related to the bowls, the below image is very interesting.

10 thoughts on “Eclipse and Hurricane Harvey”