This event hits close to home, and so I find it interesting.

The Toronto Star says that the spill was first reported “around 3 pm”, which is the hour Christ died. The river runs close to Toronto Pearson International Airport.

We’re living in strange times, and signs of that are everywhere even, apparently, in some creeks.

The Ministry of the Environment and Conservation and Parks were deployed to the scene for a clean-up.

Video of the creek was posted on Twitter, which prompted several religious references, given the sighting occurred two weeks ahead of Passover, a Jewish holiday that references the ten plagues.

“If it starts raining frogs, then I’m out,” joked another.

@CP24 @CTVToronto Hi the Etobicoke Creek is all red??? pic.twitter.com/M3i1qvtAyW

Picture Bible Code about to be fulfilled?

And shall lay thee even with the ground, and thy children within thee; and they shall not leave in thee one stone upon another; because thou knewest not the time of thy visitation. (Woe unto you Toronto! Luke 19:35)

The newspapers at the time reported how that tens of thousands from around the world were landing at the airport to see the revival — and now a river of wine and only Canadians are allowed to fly in, and that under strict rules of quarantine with penalties of three years jail for refusal to comply. If you can’t see the divine irony — go back to sleep!

In December, 1994, Toronto Life Magazine declared TAV as Toronto’s most notable tourist attraction for the year.[10]

Below is cut and pasted from a picture code revealed several years after the Vineyard Revival.

“Mourning! Tribulation! Out of Midian (comes) the sign! The fighting of the people of the vineyard — the denomination of His wine!“

Below is more from the Burning-Bush Picture Bible Code. Keep in mind that because I lived in Toronto at the time, and this code came while the revival was still ongoing, it was only natural in my mind to apply this to the Airport Toronto Vineyard — as it was called at that time. 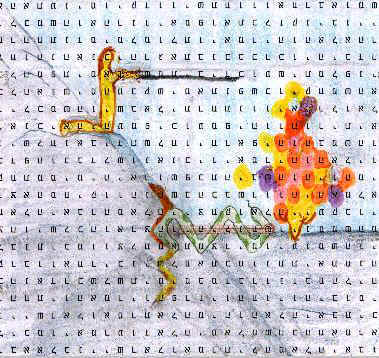 Also, notice the date assigned to the staff in the hand of Moses in the image. You can locate its date in the smaller image by enlarging it and reading the notes. (Both these images, with notes, have been on the internet for many years.) Notice the reference to the “Balance Bible Code” and “AD 429/430”, and that each row represents 120 years. Therefore, the rod equals AD 669/670 and AD 674/675 — the same dates assigned to the sighting of the comet! etc.

The Moses/Burning-bush image is embedded in Exodus 3, and the Hebrew word for “staff”, here, is the same spelling as encoded in the Lion Bible Code that forms the staff/comet in that image. Thus, both images connect together at 1260 + 1290 symbolic letter-years and thus both predicted when this comet would appear. There is so much more, but I must go on!

Side note: The man in the image at right reads: “Like I AM, that I AM!”, (i.e., referring to Jesus, and is a play on the Name that the Lord revealed to Moses at the burning bush, in this same chapter, namely, “I AM that I AM!” The rod reads, “(the wonders that) “I have put in your hand”, (Ex. 3:21). Along this rod and beyond, at every five letters, it reads: “Mourning! Tribulation! Out of Midian (comes) the sign! The fighting of the people of the vineyard — the denomination of His wine!”

I have never mentioned what the rod reads at every five letters because it is choppy grammatically, but because of these recent events (its dates as symbolic AD 639/8 to 784/3) happen to correspond with the sorrow of the most deadly storm of this year (capping off a deadly year of catastrophes), and since this comet also appeared at this same time and is perhaps “the sign” spoken of in the code, therefore perhaps Israel, “the people of the vineyard” may soon find themselves “fighting” in some major way before we reach the symbolic letter/year of “AD 784”? (AD 639 to AD 784 corresponds Nov/Dec 15th, 2011, unto April/May 9th, 2012).

The reference to “Midian” is most striking. It means “the land of judgment”, and it happens that just two verses before where these words are encoded, the actual surface text reads: “Now the Lord had said to Moses in Midian, “Go return to Egypt; for all the men who sought your life are dead,” (Ex. 3:19). And then Moses returned to Egypt and caused the sorrows upon Egypt, and the signs, and led His people of the vineyard out of Egypt to fight for the Promised Land.

Although this is just an ink spill — still, God is speaking. It reminds me of a real tragedy last year.