Many have wondered where I have been the past two months. Let’s just say that I have been in the wilderness, distraught because members of my own household have forsaken the Lord. One now confesses to having forsaken Christ for atheism and the other by her actions. Both were once thought to be ‘spiritual giants.’

It is spiritual warfare in the extreme, both blatant and unusual — the kind that is shocking to all. They are taken captive and have broken our hearts. They are chained to the dragon.

On top of all this is my sense of failure. The work that the Lord gave me has born little fruit.

But no use running.

Someone brought to my attention a star that suddenly appeared. It appeared on an hour most unusual and in a place in the sky most telling.

For 30 years, I have been speaking and writing about the importance of the year 2025. It is 70 jubilees from when Israel entered the Promised Land in 1406 BC. To be exact, the actual ‘year of jubilee’ is proclaimed on Rosh Hashannah, 2024 (September 2024).

I have also written countless articles about the 360-calendar and the Enoch calendar.  (See 360calendar.com.)

The star was first spotted about 7 pm, just after dark in Japan. Another photo taken of that part of the sky 40 hours earlier showed nothing. Thus, the star was born between 3 am Wednesday, March 17th, and 7 pm Thursday, March 18th, Japan time. (12 hours earlier for Europe and America.)

Moreover, this year was somewhat unusual:

The “sun, moon, and stars” were created on Wednesday, the fourth day of Creation, either on Nisan 4th or Tishri 4th (as agreed upon by nearly every religious Jew and Christian). Nisan 4th this year just happened to fall on a Wednesday, and it also just happened to fall on March 17th — the most probable day when the light of that ‘star’ (Super Nova) first reached earth. Thus, 3.5 years from Nisan 4th, 2021, is Tishri 4th, 2024, the “70th jubilee”.

Coincidentally, on this same date, March 17th, 2021, I posted an article entitled:

Please go to AAVSO to do your own calculations for verification. I have copied a portion of the page from AAVSO, as seen below.

By the anniversary of Jesus’ ascension into heaven, Iyar 27th, Sunday, May 9th, this new star brightened to become visible to the naked eye, a fairly rare occurrence. This is the anniversary of when Jesus ascended to the right hand of His Father, who sits on His throne.

Let’s examine the spot in the sky where the star appeared.

Observe that the Lord is on his throne (at top) along with the woman on her throne next to him. This symbolizes the Lord and the Church, which is His bride, both enthroned. This is the final scene in heaven, but before this comes captivity for a time.

Below her is depicted the same woman but presented as in captivity. She is bound to a dragon by chains. The Bible says that she goes into exile for “1260 days” to escape the dragon until that day when she is liberated. Understand that people are liberated in the Year of Jubilee, which just happens to be 1260 days from when the star first appeared!

And this is no ordinary jubilee. Multiples of seven are important in the Bible, and 70 jubilees are the same as 7 x 7 x 70. Moreover, “1260 days” is itself exactly half-seven years.

The woman fled into the wilderness to a place prepared for her by God, where she might be taken care of for 1,260 days. Rev. 12:6

The below constellations present the woman as chained to the dragon along with two fish. But the Lamb (below the woman) will overcome the dragon. The Lamb will raise her to her throne as He is risen and sits on His Father’s throne.

All who overcome the dragon will rule with Him forever.

Whoever follows Jesus until the very end overcomes the dragon. 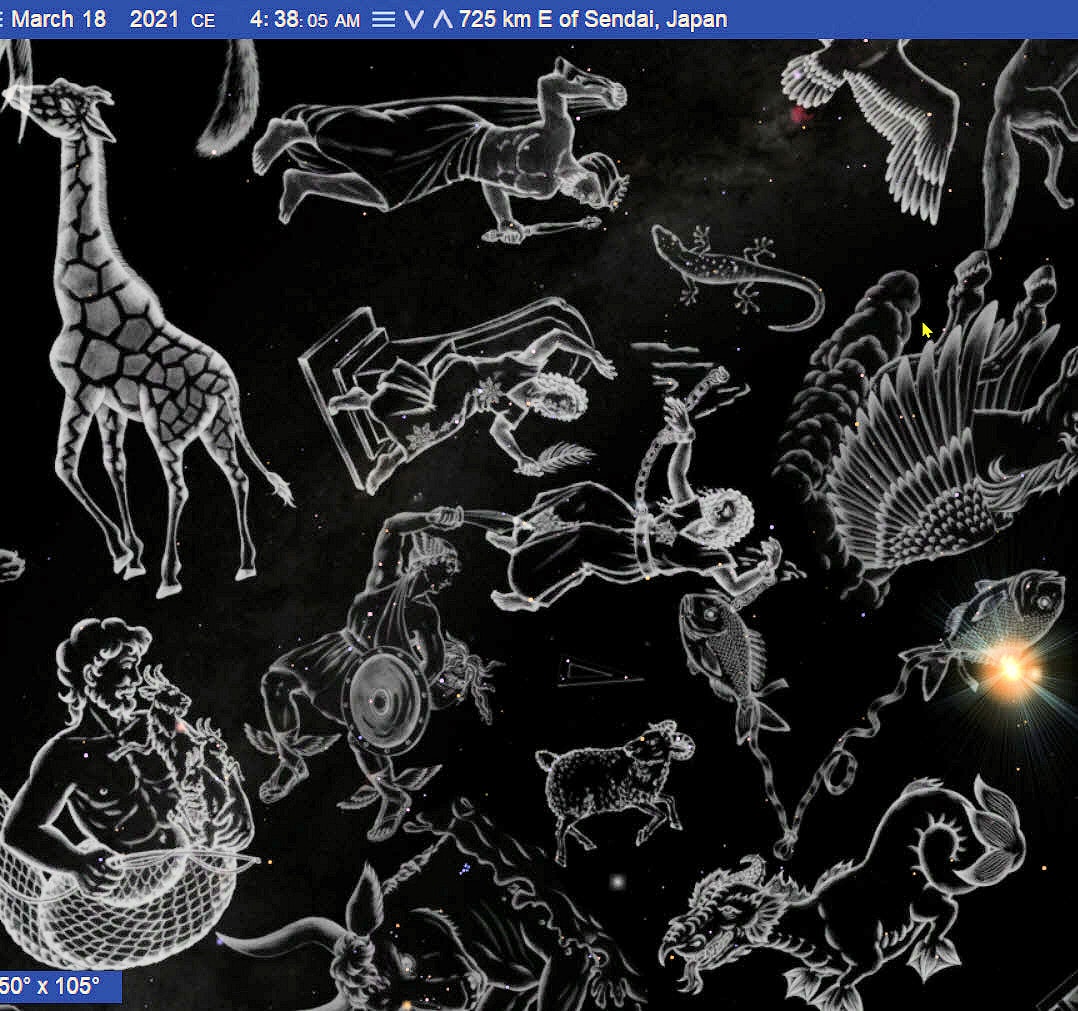 The story of Queen Esther also comes to mind:

When he saw Queen Esther standing in the court, he was pleased with her and held out to her the gold scepter that was in his hand. So Esther approached and touched the tip of the scepter. Esther 5:2

For 30 years, I have unceasingly said to expect unusual signs around the year 2025 in keeping with the book of Revelation. And so it has happened and will continue to happen.

But this does not mean that the end has come. Prophecy is fulfilled fractally. These signs are likely mere portents and symbols of events only partially fulfilled now. The full intent of these signs may not occur for yet another generation. Only God knows for sure. So be ready.

Let no man steal your crown.

Jesus said, “He that endures to the end, the same shall be saved.”

The dragon stood on the shore of the sea…

The beast was given a mouth to utter proud words and blasphemies and to exercise its authority for forty-two months, (i.e., 3.5-years). It opened its mouth to blaspheme God, and to slander his name and his dwelling place and those who live in heaven. It was given power to wage war against God’s holy people and to conquer them…

Whoever has ears, let them hear.