April 8th, 2021, I reexamined the main fractal in lieu of the astonishing “Christobrot” discovered two years ago. (Not that I discovered the methodology, but rather the true meaning and use of it, namely, that it glorifies Jesus Christ, not Buddha or some Hindu god.)

The methodology adds three-dimensional depth to a regular fractal.

April 6-7, I examined and applied the extra dimension of the Christbrot methodology to the basic fractal of the “seven churches” of the Book of Revelation. (It forms a star around the throne, as did the ancient circular candlestick.)

April 8th, I added the extra dimension to the fractal of the woman who rides on the two wings of an eagle. Here is what those original images looked like. I will not reveal the new images with the 3-d effect yet because I want to focus here on the very important discovery the next day.

The fractals allow your eyes to see what it wants to see. Therefore, think biblically.

Below is much the same. Can you spot the difference?

Compare the above with the below image that does not include the birds/cherub.

The birds are examined next.

Equation of the shape of  all “Flying Creatures” and Angels

My discovery was that the math that shapes this creation is really patterned after what is in heaven. Thus, fractals compose the entire scene that is described in the Book of Revelation. (And because the Book of Revelation draws its imagery from the rest of the Bible, therefore, fractals also describe all Biblical imagery and combine them into one composite image.)

The discovery was the natural product of 25 years of obsessive study of Biblical numeric and mathematics, by God’s grace. As such, every detail of the vast fractal image is not just visually in agreement with the Bible, but numerically also.

Early April 9th, 2021, the formula that shapes all flying things was discovered, including angels. And its location perfectly fits in with the rest of the fractal. And its mathematics is also perfect, with emphasis on “1260 days” and years. I have worked on it constantly until today, which is April 21st, mostly just tweaking the colors in order to bring out what the equation creates.

And God said, “Let the water teem with living creatures, and let birds fly above the earth across the vault of the sky.” So God created the great creatures of the sea and every living thing with which the water teems and that moves about in it, according to their kinds, and every winged bird according to its kind. Genesis 1:2-21

The meaning of the images will not be explained in detail now. A Youtube video has been created to help illustrate the location of the eagle/cherub/birds in the context of the rest of the fractal. The eagle/cherub is just one small piece in a vast puzzle. As seen in the video, the formula creates the movement of the eagle flapping its wings.

Variations in color reveal hidden dimensions to the fractal

Below is the same thing again, except with the Christobrot fractal of the Lamb overlaid. The location of the birds/angels is exactly where the equation places it, not me!

Lion and the Lamb

The first two images demonstrate full iteration and are placed in the context of the full fractal. The Lion at a distance (small images) becomes a Lamb when viewed up close. Actually, the cherub not only has wings, but also a face like an eagle, a man, a lion, and a bull. (The bull is visible in the first two images in this post.)

Jesus is the Lion and the Lamb, but the Lamb is visible only to those close to Him. 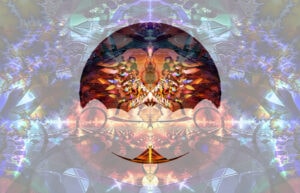 Below is the same as above, except the colors, are inverted.

Below is just the formula for the cherub/birds etc. The colors are inverted in the second image once again. 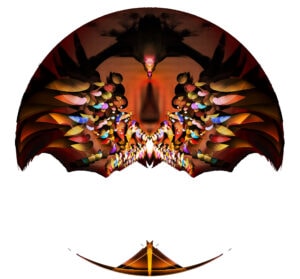 Perhaps the Lamb is more easily seen when turned into a sketch.

Note the sign of Super Typhoon Surigae (meaning, “Eagle“), its timing, and its EXACT location on the Prophetic Map (and Virgo with eagles wings) when it obliterated the record books at 888 millibars early Sunday, April 18, 2021.

Recall the first post in this recent series 40 days ago.