The last Shmita kept by modern Israel was 2014t to 2015. (The “t” stands for the month of Tishri, roughly our September.)

However, the modern Shemitah does not claim to be related to the original one, which began when Israel entered the Promised Land (1406 BC). The contemporary Shmita is based upon the return from Babylonian Exile. (It very likely commenced 444t BC; compare Neh 8:14-18; 10:31; with Deut 31:10 and Dan 9.)

Therefore there runs two parallel seven-year cycles, separated by three years. Jews today follow the cycle that began at the return of the exile led by Ezra (and Nehemiah), but God also still keeps track of the original one because of its eternal prophetic importance.

On July 14, 1406 BC, at the front paws of the constellation (stars) of Leo, an actual total solar eclipse occurred. Compare the similarity of location of the two eclipses. (Click to enlarge.)

Moses prophesied the day he died “at 120 years of age” (i.e., 120.5) concerning the future of the 12 tribes of Israel. That day happened to have been exactly six months before the July 14, 1406 eclipse, (Deut 1:3; 34:7-8). Moreover, there just happened to have been an annular eclipse occurring elsewhere in the world on this very day! On this same day, Moses prophesied about two tribes in particular that when overlapped like the sun and moon foretold the eclipse of July 14, 1406 BC… The tribes of Dan and Manasseh (Joseph).

(Manasseh inherited Mt Hermon of Bashan, the land of the Giants, [Deut 3:11; Jos 12:4; 13:12; Num 32:33]. Dan leaped toward that direction and later relocated near there. The book of Enoch [and other sources] inform us that Mt Hermon is where the angels “sons of God” descended from “heaven”, Gen 6:2, but were judged and sent to the “deep”. Recall that this eclipse occurred in the heavens where the crouching lion (Leo) leaps upon the prey of the “sun” and “moon” overlapped by the eclipse. Compare all this to the key elements of the prophecy to Joseph and Dan.

Yet another total solar eclipse occurred 40 years earlier on the very day that God said, “This month to you will be the first of the month”. This was the very New Year inaugurated by Moses at the Exodus (1446n). (As with the 360- calendar, there may have been a leap-month that year, if so, then the eclipse fell on 2Adar). This total solar eclipse passed over the source of the Nile River (recall the first plague), at Lake Victoria, and was thus visible from Upper Egypt.

This eclipse on the New Year of the Exodus was also likely at, or very near the same time God that supernaturally brought “darkness over all the land of Egypt three days”, (Ex 10:21-23). (It was the 9th plague, and thus about two weeks before the Exodus, Ex 11:8-12:3).

Six months before this total solar eclipse, which is when the plagues upon Egypt began, there was an annular solar eclipse over southern Africa. Thus, the six (or 7) months of the ten plagues began and ended with a solar eclipse in Africa; the first one upon the former autumn New Year, and the second one upon the newly commanded spring New Year! 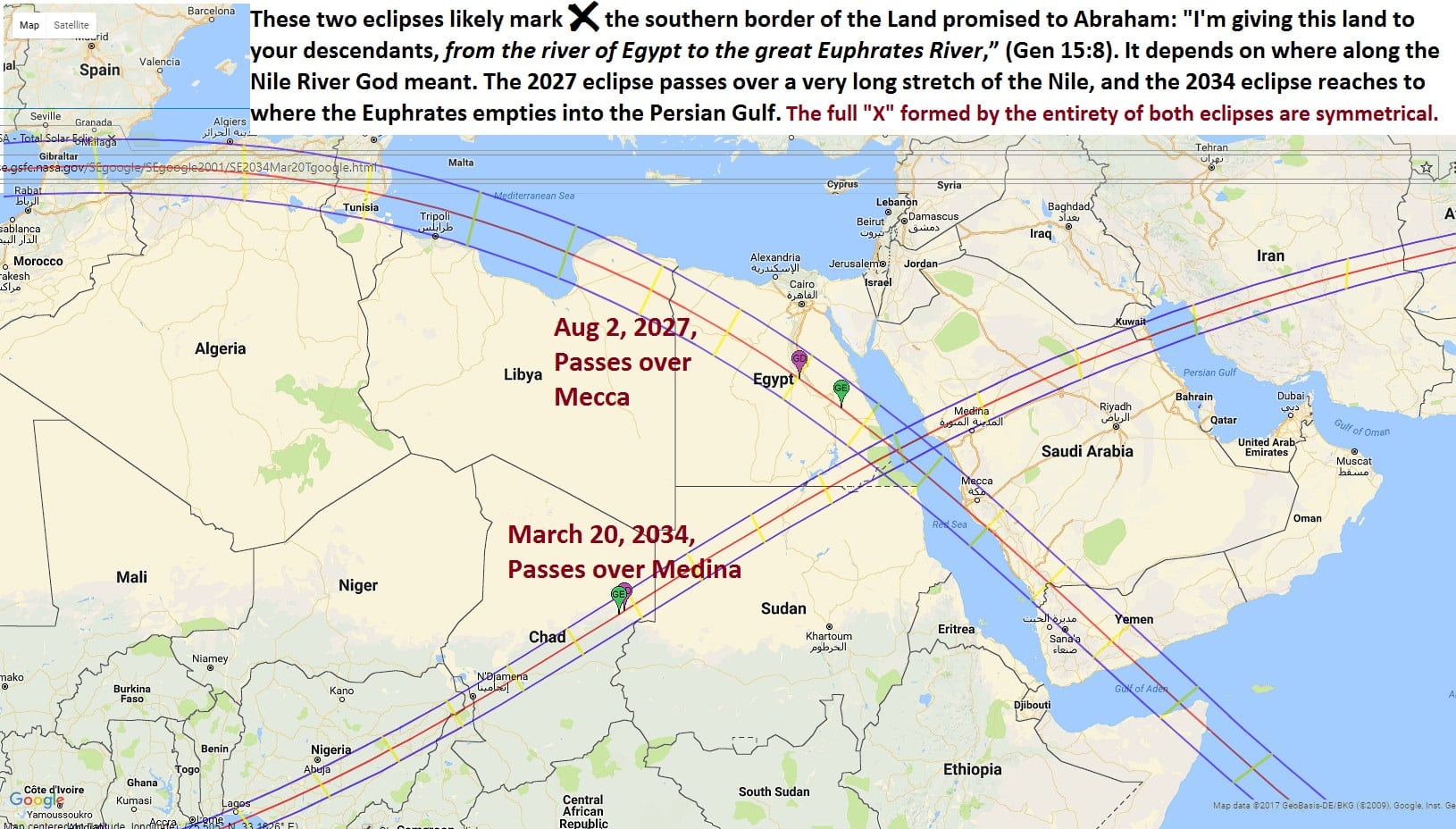 (Click to enlarge.) God marks an “X” over the southern boundary promised to Abraham that reaches along the Nile River to the Euphrates, while blotting out Mecca and Medina.

Thus God highlights Salem as a simply play on words to remind us that North America was dedicated to God just as Jeru’salem’ and the real Promised Land was back in 1406 BC.

I will explain everything soon, but as a sneak preview:

(In the following, I have condensed the information for the sake of simplicity and brevity. But we are talking exact years in every way.)

This creates a narrowing residual effect like birth pangs, thereby reversing the effects of Leviticus 26:18. Thus, 1492, 1948 and 2014 are all starting points for birth pangs — counting down to the final two years of jubilee (2024t-2026t). Moreover, each of these starting points were marked by rare Passover/Tabernacles Tetrad Lunar Eclipses.

All numeric patterns in the bible are self-similar because they are a fractal. The first image on the home page of 1260d.com is a small part of this massive fractal, created by these jubilees. It is my joy to eventually explain all this in future blogs.