Today begins a series of simplified articles to describe how Pi (the ratio of the diameter to the circle) articulates redemption.

Pi underpins the vast numeric of the Bible and history itself. Pi is how God, through Christ, redeemed man in all its vast intricacy. It’s the behind-the-scenes structure and framework of both the Bible and the natural world.

Ten thousand books are insufficient to unravel this mystery. Hence, as simply as possible, just key points will now be explained. The rest will unfold like the Flower of Life.

First two branches of the Menorah of Pi

Below is the non-algebraic form of exactly the same equation.

The above formula represents just the first two branches of the full formula.

The first two branches are all that is needed for practical purposes, both in the Bible and in nature.

Formula describes a sphere within a square

Let’s look at the first two branches of the Menorah again:

The first thing to notice is that it is made up of units to do with time. From the smallest Hebrew (and Babylonian) part of a day (1/25920th of a day; even the Rega), then hours, days, weeks, months, seasons, years.

All this, like a seed, is contained within just the first two branches of the Menorah of Pi that equals Pi, fittingly, to the 12 decimal, the same number of months in a year.

But let’s back up and start from the beginning, the very beginning!

I want to enjoy unraveling this mystery with you and have thus decided to do this leisurely, in joy, not compulsion. 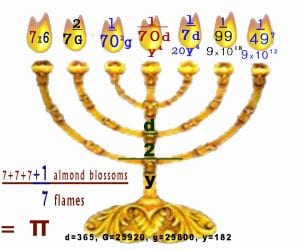 We also show that the seven days of Creation are patterned after 22/7.

This 8th day (22nd of Tishri) represents the New Creation. Therefore we literally come full circle — beginning in Genesis and ending in Revelation.