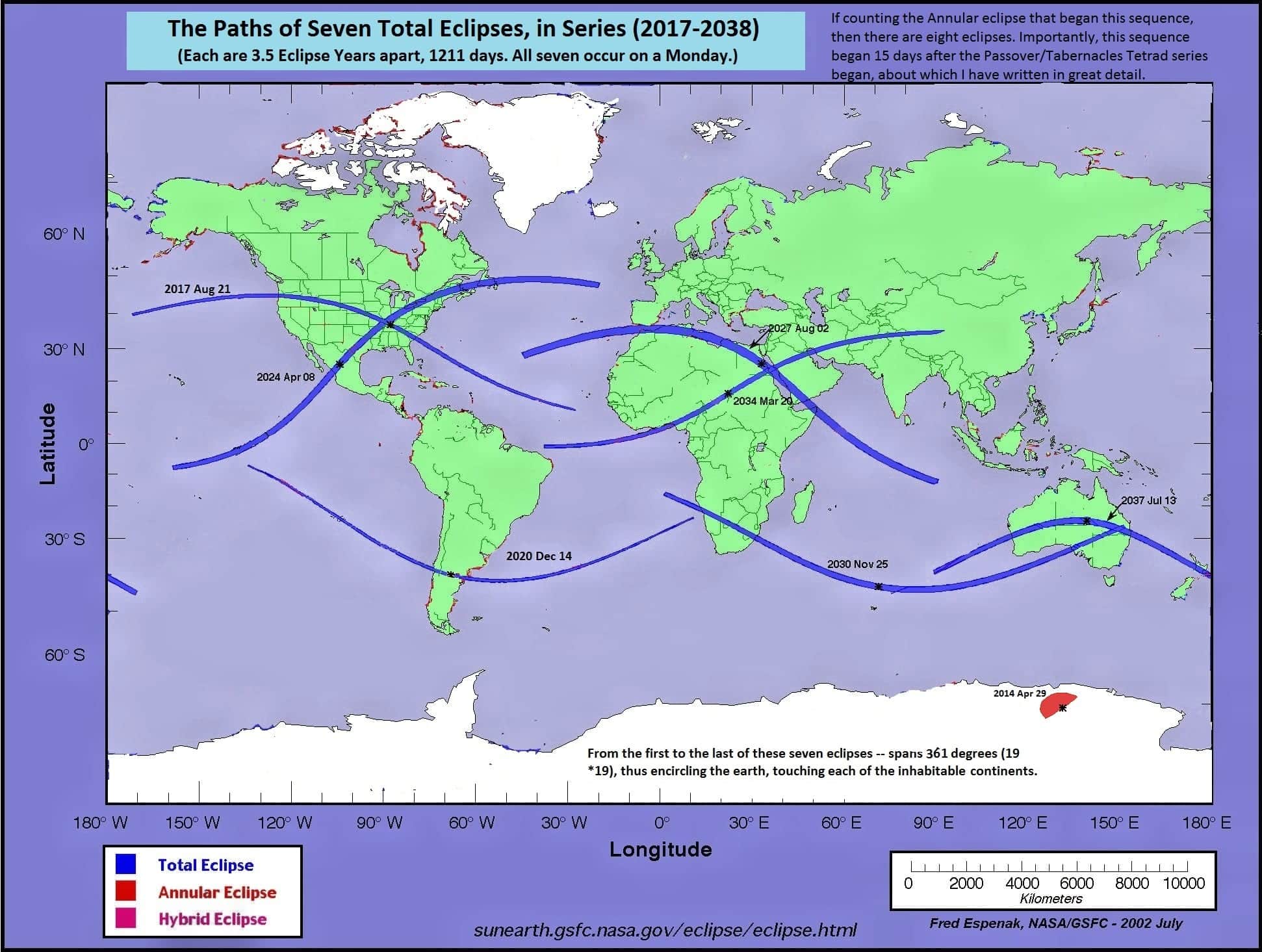 God commanded that every 49 years “the year of jubilee” must be proclaimed.  The jubilees began when Israel entered the Promised Land in 1406 BC. “1406 BC” is the date agreed upon by the majority of Bible-believing scholars and archeologists over the past 50 years and is the date that I have used consistently the past 30 years in literally hundreds of articles.

“Half of seven years”

As I have often said these 30 years, the seven years before and after the 70th jubilee is very important prophetically. I said to “expect many signs and wonders” when this time comes (and now is). Moreover, I also said that these seven years are divided in half, which is 3.5  plus 3.5 years =  7 years.

The first chart shows yesterday’s date, that is, “February 17th, 2021, which was “the 1st month, the 1st day” on the 360-calendar. All systems of measuring time are related to the 360-calendar in some way, as explained again and again these 30 years.

Yesterday was not the Enoch New Year, but it was still aligned with the very important “Wednesday”. Moreover, “1274 days” later is the first day of Tabernacles on the 360-calendar! (“the 7th month, 15th day”)

Speak unto the children of Israel, saying, The fifteenth day of this seventh month shall be the feast of tabernacles for seven days unto the Lord. Lev. 23:24

Jubilees are made up of seven Sabbath-Years, that is, seven “seven-year” periods. Therefore, the seven days of Tabernacles are especially important!

Then Moses commanded them: “At the end of every seven years, in the year for canceling debts, during the Festival of Tabernacles,when all Israel comes to appear before the Lord your God at the place he will choose, you shall read this law before them in their hearing. Deut. 31:10-11.

This is more important than you may think, but more information is not always better. Perhaps others, like David Rooke, can discuss this in the comments section at the end of this post?

“In the mouth of two or three witnesses”

As you can see, from February 17th, 2021, all calendars converge in 3.5 years on the 70th jubilee in every way imaginable. This is truly amazing to anyone who has studied the “three-and-a-half” year period of Bible prophecy.

Yes, there have been a series of storms, culminating with “February 17th, 2021”. Ironically, it hammered the US on the  US’ President’s Day weekend, a warning to Biden and even Trump (the favorite of Texas).

The United States economy, already unstable from the coronavirus pandemic and restrictions, is now taking another hit from an unprecedented coast-to-coast winter storm. Since last week, at least 38 people have died and the winter storms have and left behind immense damage.

The total damage and economic loss caused by the historic storm could be between $45 and $50 billion, AccuWeather Founder and CEO Dr. Joel N. Myers estimates.

To put the economic toll of the storm into context, AccuWeather’s estimate for the entire 2020 hurricane season, the most active hurricane season on record, was $60-65 billion.

In combination with these unusual storms is the stark transition to Biden from Trump, as well as the coronavirus. It’s a sign of things to come. (Note: “the snowstorm exited the U.S. late on February 16”, Wiki, which is the New Year on the 360-calendar to the very hour.)

This “plague” upon God’s people, more than the coronavirus or the unusual storms, are a sign of what was discussed several months ago in this post:

The beast was given a mouth to utter proud words and blasphemies and to exercise its authority for forty-two months… It was given power to wage war against God’s holy people and to conquer them. And it was given authority over every tribe, people, language and nation. (Rev. 13:4-7)

Most damages occurred in Texas due to its blackout and frozen pipes. For Texas damages rival the previous record set exactly 3.5 years ago (on both the Jewish and Enoch calendars).

Insurance industry executives say they anticipate the price tag for recovery could approach that of Hurricane Harvey in 2017 — which resulted in $19 billion in insured losses in Texas, primarily along the Gulf Coast, and is considered the costliest storm in the state’s history. Austin American-Statesmen

Also, note the stress on the importance of “3.5 years” in the article posted 3.5 years ago about Hurricane Harvey!

The Sun and Moon are “two witnesses”

The massive blackout of Texas happened exactly 3.5 years after the Total Solar Eclipse of 2017 that darkened parts of America.

The (blackout) crisis was the result of two severe winter storms sweeping across the United States on February 10–11[4] and 13–17.[5]  Wiki

Oil darkens the sea and shore of Israel

Also on Feb. 11th, 2021, (3.5 years on the Jewish calendar after the eclipse), a storm in the Mediterranean Sea caused the worst ecological disaster in Israeli history. An oil spill darkened a strip of the sea and came ashore ten days later.

The Environmental Protection Ministry secured satellite images, dated February 11, of a suspicious black patch on the sea surface some 50 kilometers (31 miles) off the coast… The Times of Israel

The symbolic day-year for “Feb. 11, 2021” (as discussed earlier in this post) symbolizes the year “1476 BC”. This happens to be the Exodus date according to the Jewish Seder Olam Rabbah when adjusted to the true date of the fall 0f Jerusalem in 586 BC as explained a few months ago. (See Key of 23.)

70-jubilees is the apex of the ages

2025 AD is the fulcrum and apex of the ages. But as I have repeatedly said for the past 30 years, expect signs and wonders in keeping with Bible prophecy when this time comes (and now it’s here!)

However, and this is important, this does not mean the end has come!

The culmination of the ages is upon us, with 2025 at the bullseye. But like the eye of a hurricane, do not focus just on the eye of the storm. The end times reach beyond the “eye” of the storm. In the same way, the 2025-bullseye does not mean that events around this time are unimportant. Over vast ages, plus or minus 77 years of 2025 also falls within the perimeter of the “2025-bullseye”. And even this does not guarantee the end of the age. One can never put God in a box.

We are now in a birth pang. These pangs began WW1 and WW2.

Eventually, those pangs will yield to the birth of a new age when Jesus Christ returns to rule the nations with a rod of iron.