Part One: And how all calendars integrate with the perfect number “seven”

The Book of Enoch informs us that the 364 and 360-day years are really one and the same, (Enoch 75:1). This is further evident when the two below tables are compared. The two calendars are highly compatible due to their 4-day difference. Observe the repetition of 4, 40, 400, and 4000 in these calendars.

Observe below how the 7th cycle is distinguished from the previous six cycles. (It’s the same pattern as at Creation when God worked six days but rested on the 7th.)

A “leap month” is 30 days on the 360-calendar.  A “leap week” on the Enoch calendar, of course, is seven days. Thus, seven leap months/weeks are inserted (intercalated) within each 40-year cycle. This is similar to the seven leap months of the Metonic 19-year cycle of the lunar calendar observed by Jews today. Seven is the number of days of Creation.

There are two intersecting 364-day calendars: The first began at Creation and seven cycles of 400 years later are when Israel entered the Promised Land in the spring of 1406 BC. Creation from this perspective was 4206 BC, (very close to the Samaritan Pentateuch Creation date of 4200 BC).
The second intersecting cycle began when the angel Gabriel came to announce the birth of John the Baptist and of Christ (about) the spring of 6 BC, (Luke 1). Therefore, retroactively, Creation was 4006 BC. (Recall the 360-calendar cycle of 4000 years.) There is also the 14006 BC “Creation”, as discussed in earlier posts — but this does not affect anything because 14000 years is 35 x 400. Note how special 1995 AD is. (Remember, when one goes from BC to AD, add a year — there is no such thing as Year “0” on our Gregorian calendar!)
Compare the below incomplete selection of 400-year cycles and observe how the “200 years” intersect one another. (The 400 years from 1406 to 1006 BC were just omitted to keep the chart small. It would look the same.) Rows 1, 3, and 5 are from 1406 BC. Rows 2, 5, and 6 are from 6 BC.

Therefore, from 206 to 406 AD the two parallel 400-year cycles synchronize, that is the New Year and all festivals fall on the same day. This means that all the sections on the chart that are not colored in beige have the same dates. This also means that for 200 years prior to 1995 AD the New Year harmonized, but for 200 years after 1995, (1995 became March 22nd and 29th), the New Year is one week apart. For example, both the mornings of Sept. 16th and Sept. 23rd (Wednesday) began the seventh month (Feast of Trumpets) on the Enoch calendar. 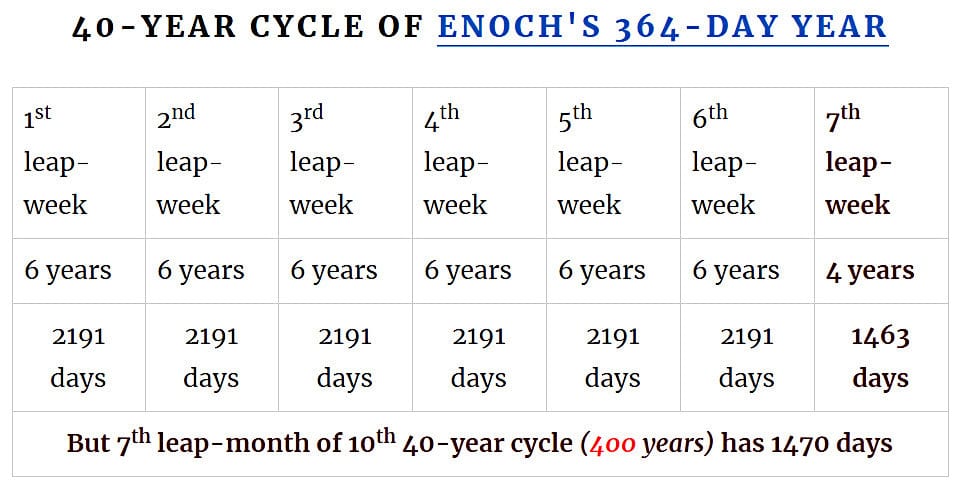 Alternative intercalation of the 364-days