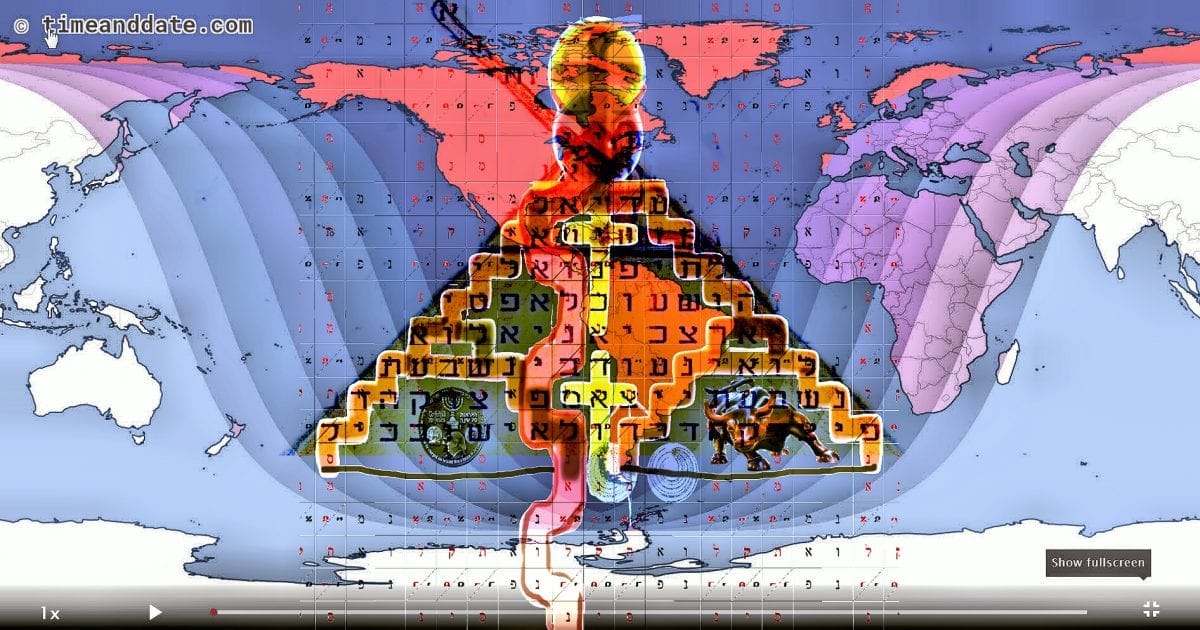 Star/meteorite falls to the moon as Blood Moon happens

The following is an update to the article about “The Trump Wolf Blood Moon” on January 20, 2019. The update became significant enough to warrant its own post. You are advised to read the (long) original article if you have the time.

Another sign has occurred… as expected when the above image was posted.

(Excluding this update) this article was essentially written during the two days BEFORE the lunar eclipse.

It happens that at the very minute that the moon entered totality a meteorite (falling star) struck the moon itself!

As we shall see in this article, the sign of this “star falling to the moon” is just another sign אות that point to the 6th seal of the book of Revelation, and to the 4th trumpet — as said beforehand in the first signs post: “Moon-god judged! Four great signs as Mene Code posted”.

Thus, the moon was struck (“judged”) by the meteorite as a sign “אות” of what is happening in the spirit realm.

(You may go to the independent website “Internet Archive” for Jan 18, 2019, to verify that the main article was put out before this eclipse — if in doubt. Also, the ‘man kneeling with measuring rod’ was added to the image at left a few hours before the eclipse. The summit in the one image was simply overlayed with the summit in the other, letter by letter.)

The rod in hand at left simply reads, “(אות  ייד(ה“, translates: “He will cast down a letter”, i.e.,  one letter for each cubit in a rod. The Bible uses the word “cast down” to refer to ‘a stone cast down’, as in Lam. 3:53. (A meteorite is a stone.) (The word “אות” is an exceptionally rich word that includes the meaning of ‘a flag as a sign’, as in a miraculous sign. And יָדָה is the root word for “Judah”.)

What “letter” is the rod referring to that will be cast down?

It is referring to the letter Aleph “א” at the tip of the rod, which is a star in the image. (The א Aleph means an ‘ox’ in Hebrew. As said, the ox/bull was the symbol for the moon-god “Sin”.)

And it refers to the letter “yod” at the other end of the rod because that letter י-ד forms the arm, and the yod י (pictogram of a ‘hand’) is where the hand of the man is in the image. And the “י” yod/hand is at the location where the stone/meteorite impacted the moon, actual and in the code! Thus, the rod appears to trace the trajectory of the falling star to the moon. (Compare all the images.)

The actual Hebrew running through the above image the distance of the rod and man is directly from Isaiah 45:21, (written twice).

(Above image is the same as the man with the rod, except here he holds the flag. Recall the “2300 days”.) The actual code in ten-letter skips is highlighted in bold in the Hebrew text below, the same that runs along the rod, (thus, spans 10*6 letters), “א-ו-ת-י-י-ד“.

“Declare what is to be, present it—
let them (i.e., the false gods) take counsel together.
Who foretold this long ago,
who declared it from the distant past?
Was it not I, the Lord?
And there is no God apart from me,
a righteous God and a Savior מֹושִׁיעַ;
there is none but me.” (For context, read all of chapter.)

So what has Jesus predicted ahead of time, besides the embassy move to Jerusalem (2300 days later), and the meteorite cast down to the moon?

“And though this world, with devils filled,
Should threaten to undo us,
We will not fear, for God hath willed
His truth to triumph through us:
The Prince of Darkness grim,
We tremble not for him;
His rage we can endure,
For lo! his doom is sure,
ONE LITTLE WORD SHALL FELL HIM!” (Line from Martin Luther’s Hymn, “A Mighty Fortress is our God“)

Meteorite image posted a couple of hours BEFORE it happened

Below is the image that I had just inserted before going to watch the start of the eclipse through my window, about 10:15 pm. It was an image of a meteorite striking the mountain pyramid — an image created seven years ago. And the moon is situated atop the pyramid, as is “Don”. (‘Don’ was the last thought that I made live before personally going to watch the eclipse).

From the perspective of the Moon

Therefore, because the falling star struck the moon, it is logical to ask what the earth looked like during the eclipse from the perspective of the moon. This next image is just that. And as to the constellations in the background, we have already discussed that beforehand in  “Moon-god judged! Four great signs as Mene Code posted”.

(In short, these two constellations depict Enki, a deity of Babylon, and the god Apollo at the time of the eruption of Anak Krakatoa at a full moon and the locust invasion of Mecca at a partial solar eclipse. Recall “Apollo” of the “5th Trump-pence” of Revelation.)

Why did God create the Blood Moon effect?

Here is a profound mystery as to the symbolism of a “Blood Moon” eclipse:

But what does the man-on-the-moon see, so to speak, from the cross?

During a blood moon, He sees sinful earth come between Himself and His Father (as represented by the Sun hid behind the earth)”.

From the perspective of the moon, the sun is veiled behind the darkened earth for about three hours during a Blood-Moon total eclipse!

Therefore, on the day that Jesus hung on the cross, God miraculously allowed man to see the Sun from Jesus’ perspective. Every eclipse, therefore, is a memorial of this day, “The Great Day of God Almighty”, especially when a blood-moon occurs on Passover, (Rev. 16:14). (Remember, “Time” acts as a fractal.)

From the sixth hour until the ninth hour darkness came over all the land. At the ninth hour, Jesus cried out in a loud voice, “Eloi, Eloi, lema sabachthani?” which means, “My God, My God, why have You forsaken Me?” (Mark 15:33,34)

Quotations about the timing of the meteorite that struck the face of the moon.

“Sunday night’s Super Blood Wolf Moon gave us all an extra special treat, as cameras captured the bright flash of a meteorite impacting the Moon, just as the eclipse reached totality!

With so many eyes glued to the sky Sunday night, watching the January Full Moon pass through Earth’s shadow in a total lunar eclipse, the timing couldn’t have been better for us to witness something unusual.

At 11:41 p.m. ET, just as the eclipse was entering ‘totality’, when the Moon was completely enveloped by Earth’s dark umbral shadow, viewers reported spotting a tiny bright flash, just for a moment, close to the southeastern limb of the Moon.”

…it was the very first (meterite strike) recorded by the project (MIDAS) during a lunar eclipse. (Scott Sutherland, Weather Network)