It is clear that the dimensions are intended to be multiplied by ten because the total height of the Star of David once the capstone of seven years is added totals 230 in height. Ten-times this equals the “2300” of Daniel 8. Therefore, the Star of David divides the 2300 and 2520 in half as said in the Bible. The total height of 230 expands to 343 (7 x 7 x 7) when the second triangle is lowered into place as seen in the diagram a few paragraphs below.

The base is composed of exactly 99 x 2. As we shall see later as we unfold this in future articles, this is the 99 and the one lost sheep that Jesus spoke of when talking about forgiving one’s brother “70 x 7” (or “77”) times, (Matt 18). And then there is the area of the triangle and eventually the volume of the pyramid and its slope that this study will eventually lead to — and to 12000 stadia, etc.

The circumference of the circle represents a lunar year rounded to 355 days. There are 12 points that intersect the circle thereby dividing the lunar year into its 12 months. As we shall see, when the capstone and walls are added to the triangle (99 + 1), then there is also 360, 364 and 365 days. 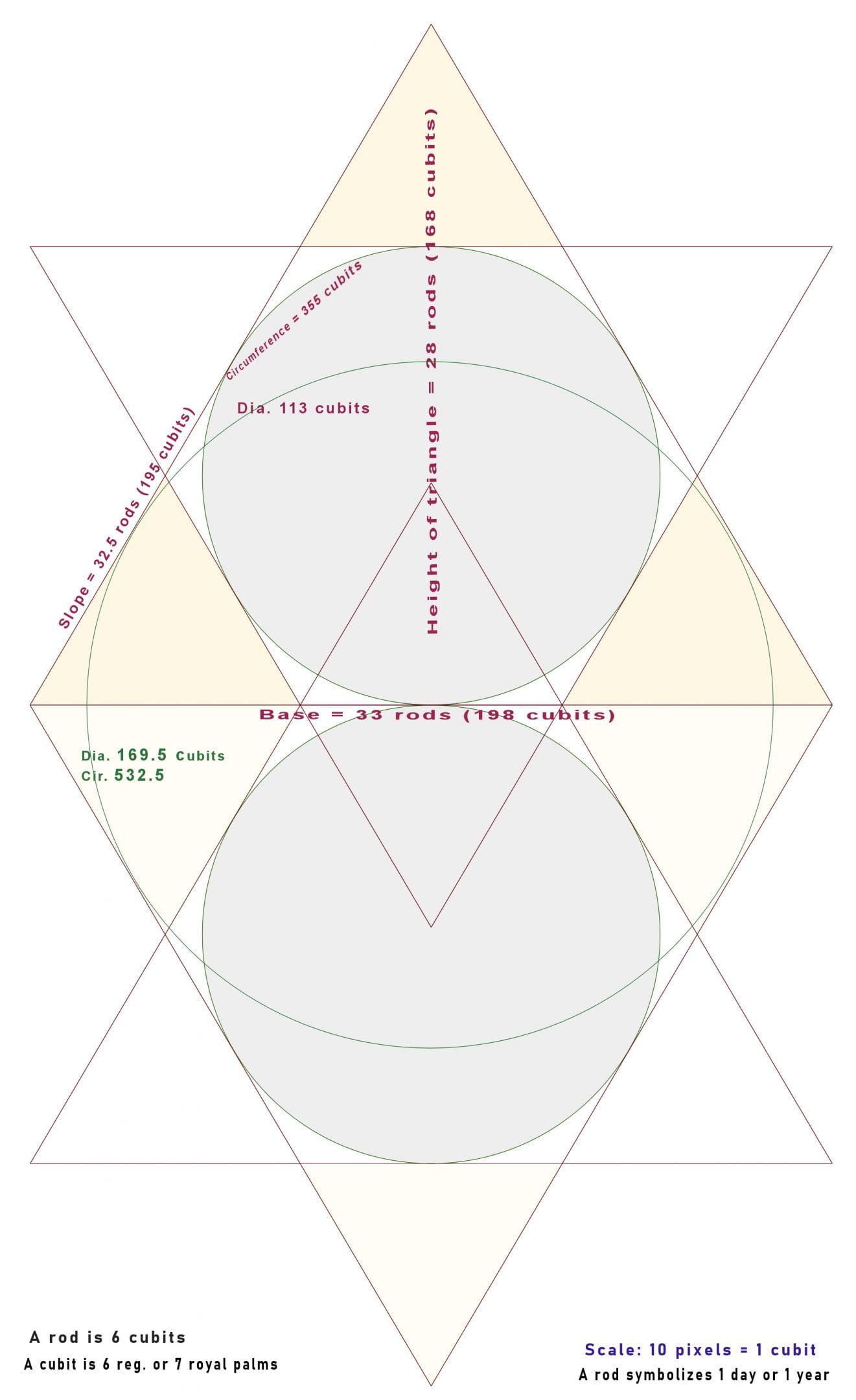 Both in Daniel and the book of Revelation, the Bible refers to “A time, times, and a half-a-time”. This indicates ‘a year, two years, and half-a-year’. When rearranged like this, notice that now there is not just one year/circle (“a time”),  but now a “times“, that is, two lunar years. The large green circle is 355 x 1.5, and thus ‘a time’ and ‘a half-a-time’. When represented by the round 360 days in a year, this totals 1260 days.

The total height is now 168 + 168 and forms a diamond-shape. It happens that 168 + 168 is a priestly year of 336 days. And because in the Bible “a day is as a year”, the diamond, therefore, divides summer from winter and day from night. In the next post, we add the seven-year capstone to the 336 to make 7 x 7 x 7. After that, we multiply all this by half-70 that equals 12000/12005 of New Jerusalem. The pyramids midpoint of the 12002.5 cubits (and fathoms) forms the gates and creates a slope of almost an exact 1200 jubilees for the total of all four sides. All this forms a transparent four-sided pyramid within a perfect cube of the same height, but whose foundation is as deep as it is high, shaped like a diamond crystal with seven “eyes”, having “branched out” from its tiny seven-cubit headstone (Zech 3:8-9). In this way, the mountain of the Lord is clothed upon by the cube boundary, (Rev 21:10). 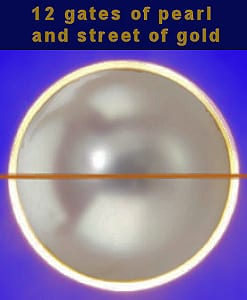 There are three gates on each side of New Jerusalem, each made of a single pearl resembling the round moon, 490 cubits wide and 490 high (70 x 7) — half beneath the surface, plus a 5 cubit golden rim, (total 500-cubit gate). Therefore, the arch of the pearl (half-circle) is 770 cubits with a diagonal crisscross at the center of its square gate of 700, with plus and minus 7 cubits, therefore, 7 x 7 x 7, too. All must pass through the cross (criss-cross) to enter the city, symbolic of the irritant that eventually forms a pearl. Follow Jesus and you can enter. An additional zone of 500 royal cubits surrounds the city, 12005 furlongs each side including this zone. The three gates on each side, therefore, are 4900 x 490 royal cubits apart, which is 12 x 490 x 490 regular cubits. (A furlong is 400 royal cubits and 480 common cubits.) The center gate rises exactly 14700 furlongs up the slope to the pyramidal peak, hence, 1200o x 49 furlongs along the slopes of the diamond city, (with its base of 12002.5, i.e., at the 500 cubit entrance). The total of all 8 slopes, therefore, is 500 x 336 x 336 reg. cubits. (336 is a priestly year.) God’s throne is at the center of the diamond-shaped city, with its cube boundary. Compare this to Ezekiel’s temple complex: It is also 500 cubits square with the altar center, plus its outer surrounding zone, similar to Ezekiel’s Jerusalem, (Ezekiel 40). The “144 cubit-wall” (24 rods) will be explained later.

Today is also the 280th day on the calendar of Enoch, which runs from morning to morning. This depicts a pregnancy period, ending daybreak, Dec 25th. Seven earthquakes occurred on the last two days (i.e., Hanukkah and Christmas eve), the seventh and most powerful occurring 63 minutes after posting this as dated at the start of this article. Whenever something significant is unsealed, natural phenomena echo.

On the 23rd of December, 2019, as the final pattern emerged of the star of David with its “moon of 355-day circumferences” surrounded by a slightly larger “sun of 365-day circumference” — it dawned on me that day that I was looking at an annular eclipse, known as a ring of fire. Late Christmas day it came to my attention that such an eclipse was indeed about to happen — in just a few hours! I soon realized that it is first seen in Israel, but only a sliver. However, given a transparent New Jerusalem (and foundation) as explained in this post, then it would be fully visible as seen at left! This is no small sign! Even the location in the heavens is important, (to be explained later). The eclipse also began exactly 3.5 days after Hanukkah. Please ponder these images carefully.

The cube depicts Creation as made in six (figurative?) days but resting on the 7th day. Because it represents creation, therefore inscribed within the cube is a sphere whose surface area is 314 rods. (r=5 rods –> Area=4πr^2=4π·5^2≈314.16) Jesus is Almighty God, (Hebrews 1:1-4; 3:4). He is Shaddai שדי! He has no equal. (Falsely taught, Enoch was supposedly changed into a mighty angel called, Metatron. The gematria of both Shaddai and Metatron is 314 – thus related to Pi. However, Metatron is an imposter introduced long after the Book of Enoch in another book called the 3rd book of Enoch, The Revelation of Metatron. The devil has a counterfeit for everything.) 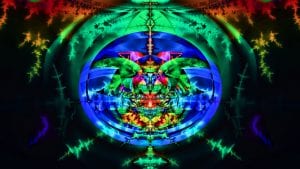 “Metatron” is the counterfeit of this true representation of the mighty angel who protects the Tree of Life. The revelation of Enoch’s calendar, Pi, the Creation Cube and the Crystobrot fractal 70 years after Israel became a nation sends a terrifying message to “powers and principalities”, (Eph 3:10). The writing is on the wall. And this is the message: Your lies are over. The saints will inherit the earth with glorified bodies — greater than the mightiest angel, (Phil 3:21). Woe, woe, woe to earth! (Rev 8:13; 14:6; 19:17). 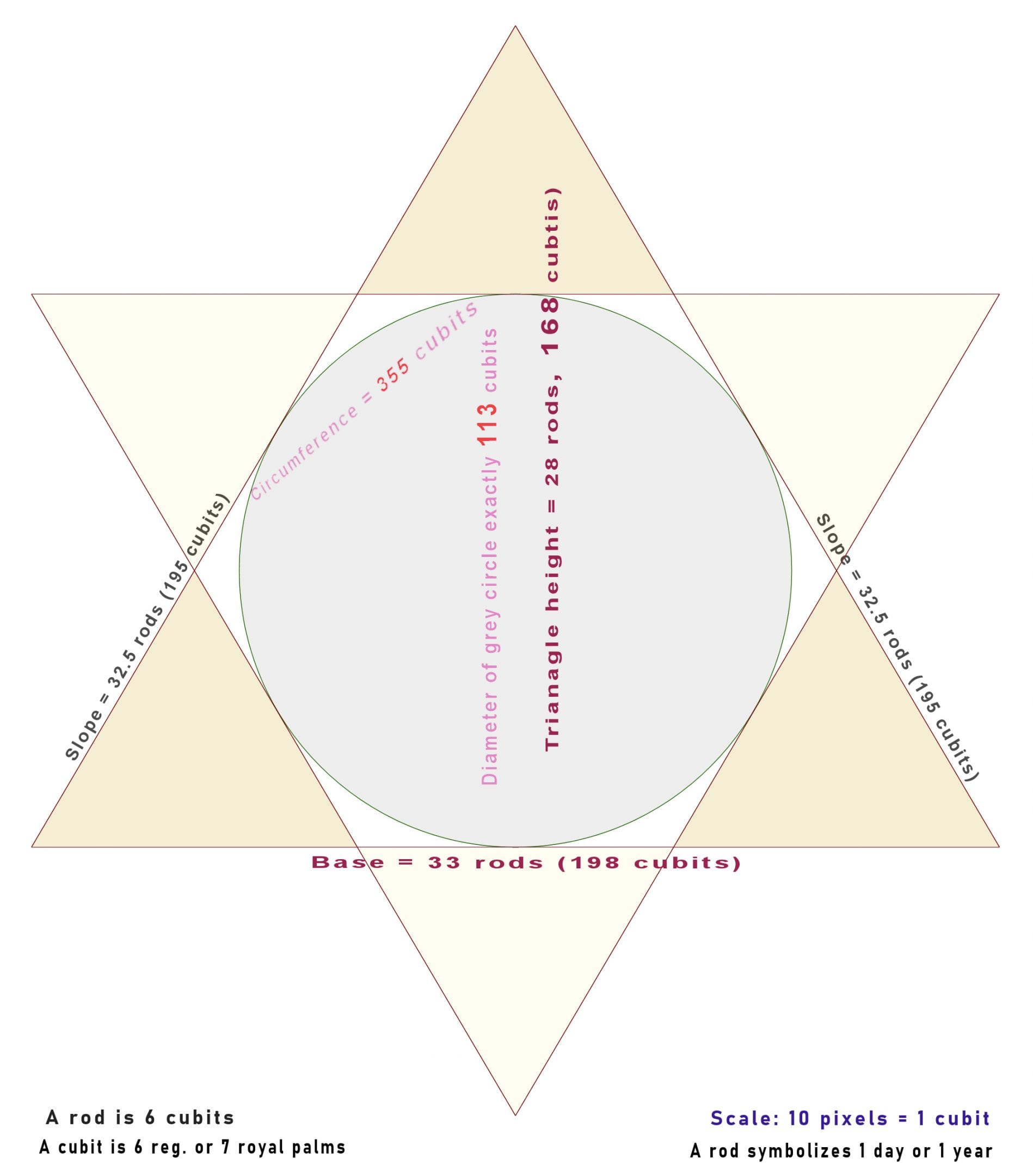